As They Made Us

Having been an actress her entire life, Mayim Bialik is wise enough to stand back and let her seasoned, starry cast shine in her feature filmmaking debut, “As They Made Us.”

Bialik writes, directs, and produces here, and the strongest moments she creates are the most understated ones—when she gives Dianna Agron, Dustin Hoffman, Candice Bergen and her “Big Bang Theory” co-star Simon Helberg room to find the nuance within the characters and their complicated interpersonal dynamics. But it takes a little while to achieve that groove, resulting in a well-acted but uneven family drama.

For about the first half, “As They Made Us” feels like two different movies awkwardly shoved together. In one, Agron’s Abigail is a recently divorced mother of two rambunctious boys who struggles to find love again. In the other, Abigail navigates the increasing demands of her dysfunctional family as the patriarch slips deeper into a debilitating ailment. Ostensibly, the latter informs the former, as flashbacks reveal her father’s verbal and physical abuse as well as her parents’ volatile spats. But the back-and-forth structure gives the film an uneasy early rhythm; “As They Made Us” finds surer footing when it focuses on the challenges of the present day.

Hoffman’s Eugene is a mercurial artist who was a terror in his younger days, as we see in quick and startling flashbacks. (Working with cinematographer David Feeney-Mosier, Bialik favors an orangey-brown color palette for these retro sequences, which eventually grows predictable and tiresome.) Now, Eugene is weak and confused as he approaches the end of his life. His long-suffering wife, Bergen’s Barbara, is such a narcissist that she’s incapable of actually caring for him, and instead uses his dependency as an opportunity to belittle him. At the same time, Barbara pushes away his various doctors and caregivers, forcing Abigail to step in and serve as problem solver. Older brother Nathan (Helberg) has been estranged from the family for the past 20 years because of all these issues and more, but now Abigail beseeches him to return, make amends and say his final farewells.

Everyone is basically awful, and it’s up to Abigail to sort through the nonsense and noise. But this is no wacky, screwed-up-family comedy. “As They Made Us” is most effective in its gentle, intimate, everyday moments, and Bialik mercifully refrains from melodrama as the film reaches its tearful conclusion. Anyone who has lost a loved one after a long illness will relate to the agonizing wait depicted here in tasteful, matter-of-fact fashion, as well as the uncomfortable moments that arise when family members try to set aside their differences at such times of loss and grief.

Agron does lovely work with this meaty role, finding a light touch within the comic moments as well as a naturalism within the dramatic ones. She also enjoys a sweet, light chemistry with Justin Chu Cary as Jay, the landscaper with whom she begins a tentative romance. (Their first date at a sushi restaurant, though, is an example of Bialik’s tendency to hang back a little too far with the camera; these are beautiful people flirting easily with each other, this is not the time to keep us at a distance.) Agron’s unfussy performance represents the best work of the “Glee” actress’ career, and she rises in fine fashion opposite her veteran co-stars. Helberg has more of a sporadic, supporting presence, but he’s particularly strong in a scene where Nathan and Eugene awkwardly reunite after decades apart, once the father is a shell of his former self. Again, Bialik knows enough to let the inherent drama of this moment speak for itself. And of course, Hoffman and Bergen are total pros, finding subtle detail in their characters’ physicality to convey a great deal about their interior lives.

“As They Made Us” is clearly a personal debut effort for Bialik, but she shows enough confidence behind the camera to make you curious about whatever other stories she has to tell.

Now playing in theaters and available on VOD.

Doctor Strange in the Multiverse of Madness 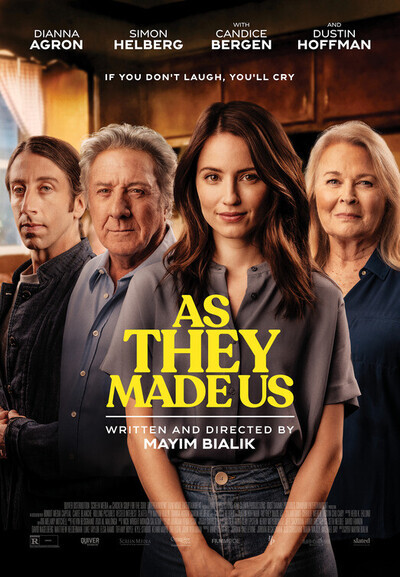