There is something about the speed in which Aaron Sorkin thinks, writes, and projects his showy swiftness onto the characters he conjures up on the page. It’s a tense, recognizable pace of one-upmanship and repetition, one that’s made the scribe a perfect match for shouty courtrooms, twisty political tête-à-têtes and come to think of it, poker, if his thrilling directorial debut “Molly’s Game” is any indication. It is perhaps no surprise then that Sorkin’s handsome prose also suits a film centered on Lucille Ball, the fearless helmer of the wildly popular CBS sitcom “I Love Lucy” and America’s immortal redheaded sweetheart with a similar kind of stamina and wit inherently required by the game of poker.

It is with a zippy touch and a number of questionable directorial choices—Sorkin is still a much better writer than director—as well as an immersive, pressure-cooker structure that is never less than enthralling, that Sorkin implants his aforesaid signature style into “Being the Ricardos.” The result is an imperfect yet vigorous and thoroughly entertaining quasi-biopic that unfolds over the course of an exceedingly eventful week for Ball in 1953. It was a time when the country was infiltrated by a Red Scare and the star’s storied career was facing the threat of McCarthyism and the Hollywood blacklist due to a piece of gossip dropped by the period's infamous tabloid figure Walter Winchell, who claimed that Ball was a registered member of the Communist Party. (There was some truth to the statement and the fierce Ball did fight against McCarthyism.)

In a sturdy and convincing performance, Nicole Kidman plays Ball with an assured, casual poise and a shrewd sense of cattiness. You can perceive the prosthetics on her face—possibly some cheek work and whatever it took to give her eyes the round and wide appearance of Ball’s famous gaze: a little cynical, a little bewildered, entirely charming. Still, this is no “Kidman disappears in the role” type of act. Perhaps we can now call the opposite of an unrecognizable physical transition a welcome trend in biopics—like Renee Zellweger did in “Judy” and Jennifer Hudson in “Respect,” Kidman opts in for an interpretation of the iconic character she’s tasked to portray, rather than a cheap imitation of her. Looking nothing like Ball’s successful, business-minded Cuban-American actor-musician husband Desi Arnaz, Javier Bardem similarly sidesteps a straight impersonation, instead, channeling the aura of Arnaz credibly on a larger level. Together, the duo give the impression of a vintage power couple fashioned by an edgy contemporary sensibility, as they navigate the distressing week ahead of them and the turbulent ups and downs of their marriage and showbiz partnership.

Those coupledom dynamics are at the soul of “Being the Ricardos,” which brings to life an impressive backdrop of the era and the production beats of the Lucy and Desi-starrer “I Love Lucy.” There are disgruntled executives, a committed team of top-shelf staff and writers—Alia Shawkat’s Madelyn Pugh and Jake Lacy’s Bob Carroll among them—as well as Lucy and Desi’s co-stars William Frawley and Vivian Vance (terrifically played by J.K. Simmons and Nina Arianda respectively). Through it all, Lucy and Desi bicker, banter, and quarrel with the taxing week ahead. There is an episode to be shot, its intricate aspects of physical comedy to be ironed out (details that Lucy is uncompromisingly careful and hands-on about), a rocky marriage to be steered, and the piece of bombshell Winchell drops on the radio to be dealt with. With Sorkin’s confident handle, the clock ticks around Lucy and Desi as “Being the Ricardos” peppily moves forward beat by beat, towards a culmination of multiple conclusions.

Sorkin’s greatest artistic feat as a director here is getting inside Lucy’s mind—there are various beautiful black-and-white segments that display how Lucy sees the machinations of a particular scene or episode in her head. The filmmaker is less savvy when he tries to bake a number of mockumentary segments into the movie, with older versions of certain characters like Carroll and Pugh (played by Ronny Cox and Linda Lavin) tell the events from their own perspectives and set the framework for flashbacks. It’s a curious decision on Sorkin’s part, distracting diversions that only take away from the main action in hand. Other creative liberties the writer/director takes pay off more generously. One of them that Sorkin is open and on-the-record about is the altered timeline of Lucy’s second pregnancy, which in fact happened a year earlier than the events depicted in the movie. But the storyline works wonders here, further propelling the image of Lucy and Desi as the trailblazers of the Golden Age of Television, radical and forward-thinking enough to push for putting a pregnant woman on TV—a no-no taboo back then, a ratings-smashing “the rest of history” event today.

Elsewhere, Sorkin effectively unpacks the era’s inherent sexism in subtle ways and portrays a marriage in impending crisis, an adoring union on paper challenged by the duo’s clashing career priorities and Desi’s ongoing acts of infidelity against Lucy. Some of these narrative avenues unfortunately bring a few of Sorkin’s worst instincts up to the surface, with the writer’s sympathies coming dangerously close to aligning with a great man who weathers a storm against his jealous wife. Luckily, there is a lot more to his “Being the Ricardos,” a complex, enjoyable gamble that comes with a big bright smile and something a touch darker underneath it, much like the larger-than-life heroine at its heart.

Now playing in theaters and available on Amazon Prime on December 21.

The Mystery of Marilyn Monroe: The Unheard Tapes 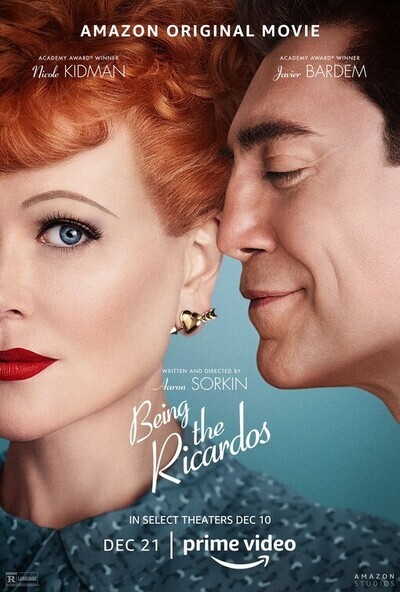