Death on the Nile

The champagne is sparkling, the wood decks are gleaming, and the white linens are pressed to a crisp. The glittering cast of “Death on the Nile” is all dressed up but, alas, they have nowhere to go.

Kenneth Branagh’s adaptation of the Agatha Christie murder mystery, the follow-up to his 2017 “Murder on the Orient Express,” finds the filmmaker once again behind the camera and in front of it as the legendary detective Hercule Poirot. And while it’s clear he’s having a ball as the elaborately mustachioed supersleuth, the journey for us isn’t quite as much escapist fun. There’s a distracting detachment at work here, both in the visual effects and performances. Individual moments from supporting players bring the film to life only sporadically. And while his A-list stars, Armie Hammer and Gal Gadot, may be impossibly beautiful, they’re both oddly stiff and have zero romantic chemistry with each other. (Hammer has other problems, off-screen, which we’ll get to in a moment.)

“Orient Express” writer Michael Green returns to adapt the screenplay, and he’s made some tweaks, which provide some welcome diversity; Sophie Okonedo and Letitia Wright are the primary standouts among the ensemble cast. But it takes an awful long time for the proceedings to get going and the tension to begin mounting. Branagh and Green’s cleverest and most compelling move is the flashback they’ve attached at the start: a striking, black-and-white depiction of the young Poirot in the trenches of World War I, where he demonstrates the resourcefulness and sharp wit that will become his trademarks. A convincingly de-aged Branagh also allows us to witness the origin story of Poirot’s signature mustache, which launches the film on a note of shock and heartbreak. I would rather have watched the rest of that movie; it had texture and verve to it. Instead, we get “Death on the Nile.”

Jumping ahead to 1937 London, we see the established and adored Poirot entering a packed and jumping blues club, where Okonedo’s Salome Otterbourne is performing on stage. Her niece, Wright’s Rosalie Otterbourne, is also her tough-as-nails manager. But there’s a show for Poirot to take in on the floor, as well: the handsome Simon Doyle (Hammer) and his vivacious fiancée, Jacqueline de Bellefort (Emma Mackey), are tearing it up with an erotic, acrobatic dance. Seeing Hammer introduced this way, in such an aggressively physical and sexual manner, makes it impossible to ignore the allegations of assault and abuse that several women have made against the actor. (He has denied them and said that whatever occurred within these relationships was consensual. Still, it’s hard to shake that unsettling feeling.)

But once Jacqueline introduces Simon to her childhood friend, the ravishing heiress Linnet Ridgeway (Gadot), he only has eyes for her. And who could blame him? This is where Branagh’s choice to shoot in 65mm is particularly effective. Gadot’s entrance into the smoky club, in a drapey, metallic silver gown, is so dreamy and creamy, it’s richer in fantasy and escape than anything that happens later on the boat. In no time, Simon and Linnet are married, and Poirot finds himself swept up in their tony honeymoon celebration on the Nile while vacationing in Egypt.

He's there at the insistence of his charming, old friend Bouc (Tom Bateman, reprising his “Orient Express” role), whose wealthy, painter mother, Euphemia (an enjoyable snarky Annette Bening), has come along for the adventure. Also aboard the SS Karnak are Linnet’s lawyer/cousin Katchadourian (Ali Fazal); her ex-fiancé (Russell Brand in an interestingly understated turn); her personal maid (Rose Leslie); and her godmother with her traveling nurse. They’re played by the longtime comedy duo of Jennifer Saunders and Dawn French, and you long to see what they’d do with this material if left to their own devices. The Otterbournes also have been invited to celebrate the Doyles’ nuptials since Salome was performing the night they met—and it’s a good thing, too, because Okonedo single-handedly steals this movie with her perfectly delivered zingers. Again, I want a movie about that character.

And there’s an uninvited guest who keeps showing up, first at the hotel and later on the ship: the jilted Jackie, stalking the newlyweds and causing yet another reason for everyone to hover about, eavesdropping and side-eying in various well-appointed parlors. With her wide, brown eyes, Mackey brings just the right amount of crazy to the role. But as is the case with just about everyone in “Death on the Nile,” there’s not much to her beyond a couple of character traits. Brand, Fazal, French, and Leslie get especially short shrift. And so when there’s a murder—because of course there’s a murder whenever Hercule Poirot is around—this whodunit mostly becomes a who-cares. We learn far too little about these characters, even after the detective’s strategic questioning.

Meanwhile, at the center of the movie where a passionate romance should be the driving force for thrills and suspense, there’s a giant hole shaped like Hammer and Gadot. They have absolutely no connection with each other physically or emotionally. Their timing and body language is all wrong. It’s impossible to believe these two people have fallen so intensely and spontaneously in love with each other that they’re willing to destroy an engagement (his) and a treasured friendship (hers) to be together.

We can’t properly luxuriate in the scenery, either. So much of “Death on the Nile” looks empty and artificial—a glossy, CGI-rendered version of legitimately grand and impressive sights. At times, this may as well be “Death on the Nile: The Video Game.” Given how long the film has been delayed because of the pandemic, maybe that’s what it should have been. 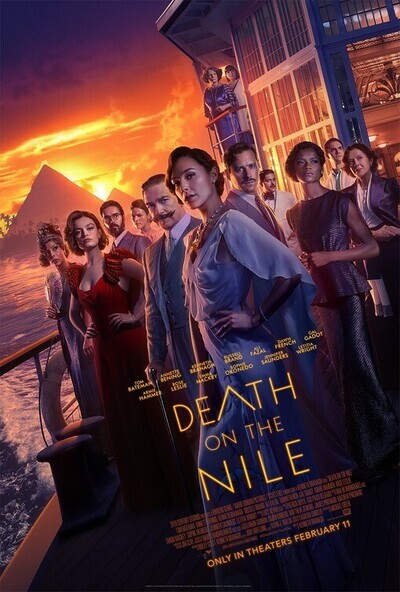 Rated PG-13 for violence, some bloody images, and sexual material.

Writer (based upon the novel by)