What happens to a counterculture and its devotees when alternative becomes mainstream? This is the question at the heart of “Freeland,” a psychological drama that unfolds economically yet patiently, venturing into thriller-adjacent soils as it traces the life of a self-sufficient entrepreneur whose independence becomes at odds with changing systems. She’s Devi (Krisha Fairchild), an autonomous 60-something woman who’s thus far made a good living for herself, breeding and selling top-shelf marijuana for nearly three decades. But she is now facing the threat of legalization, a process that comes with hefty fines if she fails to comply with all the government-mandated steps, an inevitability to convert her homespun land and abode into a state-of-the-art facility at great expense, and eventually, a significantly reduced value for her stains that she pours her blood, sweat, and tears into every season.

All this might sound counterintuitive at first—how could legalization be bad for such a business that has always existed illegally and on the margins at great risk? Isn’t being out in the open and accessible to all better for one’s bottom line? Making their narrative feature debut, the film’s co-directors Mario Furloni and Kate McLean were apparently confronted with the same questions when they first discovered Northern California’s Humboldt County nearly ten or so years ago as documentarians and got to spend some time amongst its isolated community of low-key outlaws. Devi is based on the filmmakers’ own reflections. As someone who’s lived in seclusion in a place that thrived at the height of the drug wars amid go-getting residents building their own town their way and establishing their own rules, she is now challenged by the greatest enemy of them all: capitalism. How can she possibly maintain her legacy against a fierce competition with deep pockets and navigate all the new regulations?

Making use of their documentarian eye and perceptiveness as intimate observers, Furloni and McLean intricately build Devi’s no-bells-and-whistles world, taking us inside a communal operation that evolves around well-tended fields and cheerful tables where joints are passed around and products are packaged. Making an unforgettable impression in Trey Edward Shults’ “Krisha” back in 2015, Fairchild once again brings a captivating, organic sensibility to her character, crafting Devi’s wild and varied mood swings with a relatable sense of precision. We see her at the tail end of her better days in the film’s early moments, surrounded by a trio of young, hourly employees, all dealing with their own slice of uncertainty in life. There is Mara (Lily Gladstone), a practical and sensible young woman trying to gauge her prospects. There is Casey (Cameron James Matthews), the clan’s laid-back resident not really rushing to make any firm decisions. There is also the overtly ambitious Josh (Frank Mosley), who seems to be perennially at the ready with unsolicited opinions on the future and progress of Devi’s business.

The filmmakers capture the clan’s evolving dynamics sensitively, underscoring Devi’s growing discomfort and paranoia in well-paced fragments when she goes from a savvy business owner to someone struggling to pay her workers on schedule. Amplifying the tension is a series of anonymous, almost ghostly text messages Devi receives one day from a supposedly interested buyer intending to move her product—her best ever—to potential customers out East. Desperate for an opportunity and having freshly returned empty-handed from a soul-killing cannabis expo, Devi engages with the messages, only to realize she might be the victim of a scam. Could one of her nearest be victimizing her? Or is she needlessly distrustful in an alienating world?

While the finale of “Freeland” feels unearned and a touch up-in-the-air, the film’s visual qualities elsewhere make up for this relative weakness. In that regard, the greatest achievement of “Freeland,” other than Fairchild’s performance, proves to be its lived-in feel, an attribute seen everywhere—from the loveably hippy-dippy clutter of Lauren Donlon and Alexander Zane Irwin’s production design to Furloni’s atmospheric cinematography of hauntingly foggy skies and magnetically tall redwoods. It’s a contemplative film that manages to whisk the audience away to an unfamiliar land whose off-the-grid survival you can’t help but root for. 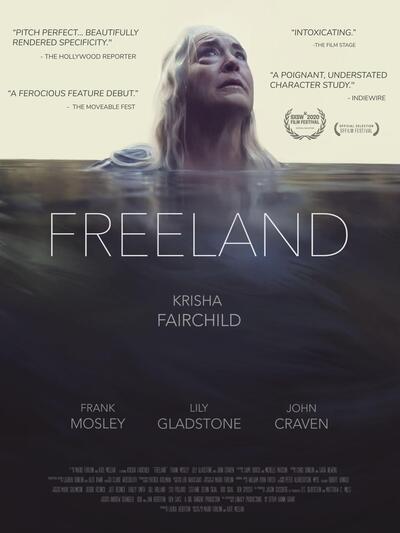 about 24 hours ago
Advertisement