With romance callously sliced up into right and left swipes, dating has long been an undignified concept in the online world. You could even call it a meat market—sure, it’s a clichéd phrase, but what cliché isn’t rooted in some truth?

In debuting director Mimi Cave’s entertaining and bonkers satirical horror “Fresh,” Noa knows all about the losers on the bland menu of her endless app scrolls—it’s understandable that she has lost her taste for kissing the frogs. Still, our modern West Coaster—charismatically played by “Normal People” breakout Daisy Edgar-Jones—refuses to give up optimism and puts herself out there courageously, scarf-wearing douche-y dudes be damned! It’s through her sweet hopefulness that she passes on countless faux-cool profile photos during one such evening of mindless browsing, and reaches out to someone sporting a cute dog picture as his avatar. But what thanks does she get for her curiosity? Nothing, just a gross dick picture sent by your average creeper.

We get introduced to Noa in a pitch-perfect opening scene during a horrendous date with one of those aforesaid scarf-wearers. A cheapskate (“Bring cash,” he reminds Noa before the date even takes place), Chad chews his noodles while spewing all sorts of stomach-churning vitriol. “You would look great in a dress,” he rudely tells the sweater-donned Noa, putting her down for not being into femininity “like the women of his parents’ generation.” He insults their waitress with blatant racism. He feels entitled enough to grab all the leftovers, not hold the door for Noa (What happened to all that “parents’ generation” talk?) and calls her a stuck-up bitch when his reach for a kiss doesn’t get reciprocated. So can you really blame Noa for rapidly buying into the grand gestures of Sebastian Stan’s traditional charmer Steve on the heels of this disastrous evening and falling to bed with him?

You can’t—hey, it’s the ever-appealing Stan we’re talking about—but you are allowed to raise a slight eyebrow when this practical woman completely trusts a perfect stranger she only just met at a supermarket aisle, by allowing him to whisk her away to a surprise weekend getaway to an unknown location. Thankfully, her droll, bisexual best-friend Mollie (a terrific Jojo T. Gibbs) who seems to have given up on men completely, has much sharper instincts. No social media footprint? Not even an Instagram page as someone who claims to be a plastic surgeon? To Mollie, these are all red flags.

They will seem shady enough to the viewers too, thanks to Lauryn Kahn’s zippy script and Cave’s visual language that, in unison, suggest enough of an unease beneath Steve’s casual allure. To the careful ear, “I don’t eat animals” from his lips will ring one or two alarm bells. (Why not just say, “I’m a vegetarian?”) Other clues will hint shades of this mystery man’s unusual tastebuds, too. But it’s not until the title card “Fresh” appears more than 30 minutes into the film that they will be spelled out for all their grotesqueness. (Speaking of late-emerging title cards, if “Drive My Car” was a bridge too far for you in that department, wait until “Fresh” sneakily asserts, “Hold my Old Fashioned!”)

While the surprising twist from this point on is what’s sickly fun about “Fresh,” it’s near-impossible to talk about this movie without spoiling it to some degree. So read everything below at your own risk, knowing that your first-time experience with the film will be irreparably altered if you do so. Here it goes: Steve is in fact a cold-blooded liar as well as a cannibal, satisfying the needs of his ridiculously rich human-flesh-eating clientele by selling them processed female meat. Noa is just the latest one of his victims who has taken the bait. But something seems to be different about his approach to her, as she quickly learns through cell-to-cell inmate banter in the ruthless Bluebeard’s dungeon. He seems to actually like Noa, and maybe there is a way for her to use her infectious smile and enchanting femininity to outsmart this serial killer.

I’m making it all sound a lot more serious than it actually is. Know that the irresistibility of “Fresh” lies in the fact that it doesn’t take itself too seriously—all things considered, the film manages to stay light on its feet with its “Hostel” meets “Ex Machina” concept, mostly avoiding overt, self-righteous preachiness in its moderately-feminist tale where women’s bodies are perishable commodity. In this regard, Cave and her cinematographer Pawel Pogorzelski (a repeat Ari Aster collaborator) offer up a buffet of outlandishly gross but brightly lit visual tidbits of men savoring their pricey meals, keeping the mood nimble and wacky. Still, a huge part of the credit belongs to Stan, who goes all in on a maniacal performance that’s often laugh-out-loud funny, even when the actor leans a bit heavily towards Christian Bale’s “American Psycho” mannerisms on occasion. (Two fiendishly comical scenes accompanied by Peter Cetera’s “Restless Heart” and Animotion’s “Obsession” come to mind.) Gibbs is also the film’s secret weapon—while her character is dangerously close to a stock “supportive black best friend” on the page, Gibbs defies the clichés and claims Mollie as her own.

Still, the interpretation of race in “Fresh” leaves a lot to be desired—there is something to be said about a carelessly privileged white woman dragging her savvy black friend into harm’s way. Also under-explored are the motivations of Charlotte Le Bon’s Ann—as Steve’s wife (and possibly one of his former victims), this self-interest-focused white traitor clearly feels no responsibility towards her own gender, an idea that Kahn’s script only vaguely teases and then abandons in its untidy (and increasingly gory) final act. But perhaps these are concerns for a meatier film. In the meantime, allow the tongue-in-cheek “Fresh” to satisfy your appetite for a generous helping of heartening sisterhood and eradicate your cravings for a juicy burger, possibly forever. 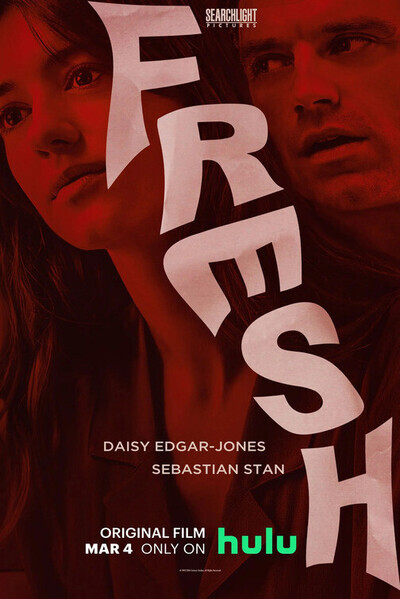 Rated R for strong and disturbing violent content, some bloody images, language throughout, some sexual content and brief graphic nudity.