Brutality beneath the manners

So Martin Scorsese told me one autumn afternoon, as we drank tea in the library of his New York town house, a house like the ones inhabited by the characters in his film "The Age of Innocence."

He was explaining why the director of "Taxi Driver" and "Raging Bull" had made a film about characters defined by the social codes of New York society in the 1870s. We had both read the Edith Wharton novel, and so really no explanation was necessary. We understood that passion and violence can exist in places where absolute decorum rules; that Jake LaMotta, smashing his fists into the walls of his cell in "Raging Bull," found a release that Newland Archer could not discover anywhere in the sitting rooms and dinners and nights at the opera that defined his life in The Age of Innocence.

Archer was a man who loved one woman and married another, because it was the right thing to do. Or, more accurately, because everyone in his world thought it was the right thing to do, and made sure that he did it. The film employs a narration (read by Joanne Woodward) that reflects the way Wharton addresses us directly in the novel, telling us how Archer was trapped. Listen to her: "They all lived in a kind of hieroglyphic world. The real thing was never said or done or even thought, but only represented by a set of arbitrary signs."

Those words could also describe the world of the Mafia in Scorsese's films. Scorsese told me that in reading Wharton's novel, "What has always stuck in my head is the brutality under the manners. People hide what they mean under the surface of language. In the subculture I was around when I grew up in Little Italy, when somebody was killed, there was a finality to it. It was usually done by the hands of a friend. And in a funny way, it was almost like ritualistic slaughter, a sacrifice. But New York society in the 1870s didn't have that. It was so cold-blooded. I don't know which is preferable."

"The Age of Innocence" is one of Scorsese's greatest films, improperly appreciated because, like "Kundun" (1997), it stands outside the main line of his work. Its story of a man of tradition who spends a lifetime of unrequited love resembles one of Scorsese's favorite films, Michael Powell's "The Life and Death of Colonel Blimp."

The story: Newland Archer (Daniel Day Lewis) is planning a proper marriage to the respectable society virgin May Welland (Winona Ryder). Then the Countess Ellen Olenska (Michelle Pfeiffer) returns to New York, and her presence stirs him beyond all measure. Ellen is an American, May's cousin, who unwisely married a Polish count. The count took her fortune and mistreated her, she left him and has fled back to New York -- where in the movie's opening scene she joins her relatives, including May and May's mother, in their box at the opera.

This causes a shock in society circles; the Wellands are boldly and publicly standing by the Countess in the face of malicious gossip, and Newland Archer admires it. Observe how Scorsese sets up the dynamic of the film before a word has been spoken between Newland and May or Ellen. It involves a point-of-view sequence, and Scorsese told me: "We look through his opera glasses, seeing what he sees. But not just in regular time. We did stop-frame photography, exposing one frame at a time and printing each frame three times and then dissolving between each three frames. It looks sort of like what you see when you look through an opera glass, but with heightened attention. He scans the audience and then backs up and stops on her. With all the different experimenting we did, that took almost a year to get right."

Archer prematurely announces his engagement to May, perhaps because he senses the danger in his attraction to Ellen. But as he sees more of Ellen, he is excited not only physically but especially by her unconventional mind and tastes. In Europe, she moved among writers and artists; in New York, Newland has a library where he treasures his books and paintings in solitude, because there is no one to share his artistic yearnings. He has a safe job in a boring law office, and only in his library, or during conversation with the Countess, does he feel that his true feelings are engaged.

She is attracted to him for the same reason: In a society of ancient customs and prejudices, enforced by malicious gossip, she believes Archer to be the only man in New York she could love. Ellen tells him, "All this blind obeying of tradition, somebody else's tradition, is thoroughly needless. It seems stupid to have discovered America only to make it a copy of another country." Again, later: "Does no one here want to know the truth, Mr. Archer? The real loneliness is living among all these kind people who ask you only to pretend."

I recently read The Age of Innocence again, impressed by how accurately the screenplay (by Jay Cocks and Scorsese) reflects the book. Scorsese has two great strengths in adapting it. The first is visual. Working with the masterful cinematographer Michael Ballhaus, he shows a society encrusted by its possessions. Everything is gilt or silver, crystal or velvet or ivory. The Victorian rooms are jammed with furniture, paintings, candelabra, statuary, plants, feathers, cushions, bric-a-brac and people costumed to adorn the furnishings.

These people always seem to be posing for their portraits, but Scorsese employs his invariable device of a constantly moving camera to undermine their poses. The camera may be moving so subtly we can hardly tell (unless we watch the sides of the screen), but it is always moving. A still camera implies an observation, a moving camera an observer. The film's narrator observes and comments, and so does the camera, voyeuristically. Occasionally, Scorsese adds old-fashioned touches like iris shots to underline key moments. Or he'll circle an area in brightness and darken the rest, to spotlight the emotion in a sea of ennui.

His second strength is a complete command of tone. Like her friend Henry James, Edith Wharton seldom allowed her characters to state bluntly what they were thinking. They talked around it, inhibited by society and perhaps afraid of their own thoughts. Wharton, however, allows herself a narrator who does state the plain truth. At a key point in the story, May, now Archer's wife, makes comments that reveal how frankly she views the world, and then quickly returns to her tame and naive persona. The narrator tells us what Archer cannot, that he wonders "how such depths of feeling could coexist with such an absence of imagination."

Consider the most crucial passage in the film. Archer has decided to take a decisive step, to break away from his flawless but banal wife, be with the Countess and accept the consequences. Then the prospects of the Countess change dramatically, and his wife tells him something he did not expect to hear. He is an intelligent man and realizes at once what has been done, how it cannot be undone and what as a gentleman he must do. His fate is sealed. As he regards the future, the narrator tells us what cannot, in this world, possibly be said in dialogue:

He guessed himself to have been, for months, the center of countless silently observing eyes and patiently listening ears. He understood that, somehow, the separation between himself and the partner of his guilt had been achieved. And he knew that now the whole tribe had rallied around his wife. He was a prisoner in the center of an armed camp.

The film ends with a sense of loss, sadness and resignation, reminding me of the elegiac feeling in Orson Welles' "The Magnificent Ambersons." The final scene, on a park bench in Paris, sums up not only the movie but Scorsese's reason for making it; it contains a revelation showing that love is more complex and secret than we imagine. Archer's son Ted says his mother told him his father could be trusted because "when she asked you to, you gave up the thing you wanted most." Archer replies, "She never asked me." We reflect, first, that she never did, and second, that she never needed to.

There are entries on Scorsese's "Mean Streets," "Taxi Driver," "Raging Bull" and "GoodFellas," and Powell's "The Life and Death of Colonel Blimp," in the Great Movies section; also a 1993 interview with Scorsese about "The Age of Innocence." 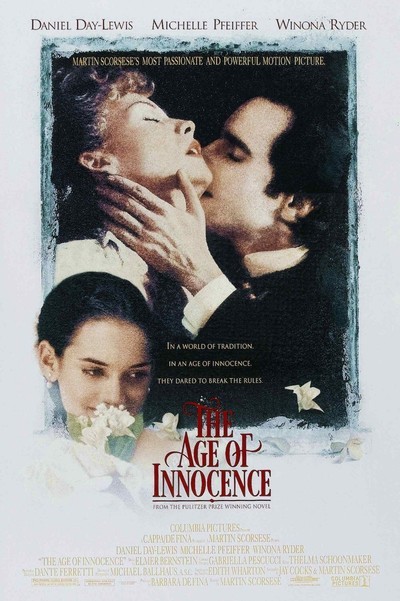 Winona Ryder as May Welland

Based On The Novel by

about 21 hours ago
Advertisement