You can tell a few things about the Irish horror drama “Here Before” from a scene where the camera slowly and deliberately pushes in on a schoolhouse coat hook. Written and directed by Belfast native Stacey Gregg, “Here Before” concerns Laura (Andrea Riseborough), a grieving mother, and Megan (Niamh Dornan), Laura’s grade school-age neighbor. Megan’s name hangs over the above-mentioned coat hook, but, as the camera pushes in, we soon notice that “Megan” has been crossed out and replaced with “Rosalie,” Laura’s dead daughter.

The camera’s movement and focus on Rosalie’s name demands our attention, but this image is less about basic information conveyed—something has replaced Megan with Laura’s child (played by Grace O’Dwyer)—and more about confirming the inescapable sort of dread that’s already been developed throughout the movie’s first half. Sometimes, the suggestive nature of Gregg’s impressionistic mood piece—as well as a characteristically strong lead performance by Riseborough (“Possessor,” “Mandy”)—is enough to sustain one’s interest in “Here Before.” Right up until Gregg lobs an unsettling and only partly satisfying twist at viewers and leaves us to work through our feelings on our own time.

At minimum, Gregg is smart enough to emphasize and maybe even weaponize Riseborough’s expressive face. Much of Laura’s story concerns a mystery: how could Megan have experienced, let alone know, anything about Rosalie? She tells Laura that she remembers being buried in the local cemetery. Megan also asks Laura to make a ketchup smiley face on her sandwich, just like Rosalie used to do. Watching Riseborough, in character, look meaningfully and process her emotions is often compelling enough to make you want to hold on until Laura inevitably must confront Marie (Eileen O’Higgins), Megan’s understandably concerned mother.

Laura and Marie’s relationship understandably remains tentative for much of “Here Before” since Marie’s a new neighbor and doesn’t really know Laura beyond their brief interactions. There are, however, a couple of scenes that hint at an unspoken sympathy between these two characters. That bond is also heavily underscored in one scene through distracting dialogue—Marie: “Some things can't be fixed. Doesn't mean you should stop tryin'."—but for the most part, the ensemble cast’s uniformly strong performances speaks loudest in “Here Before.”

Riseborough’s performance stands out given how much of “Here Before” depends on our willingness to be led to the movie’s combustive finale. When Riseborough looks at Dornan’s character, Laura becomes defined by the sort of inviting open-ness that makes you want to take another look at Megan. Not just to see what exactly is going on with this kid, but to get a sense of how Megan’s inspired Laura’s curious emotional attachment.

Towards the end of the movie, Riseborough’s emotions seems more and more inaccessible. Her face broadcasts less information to us, or anyone else outside of her character’s head. That ambiguity can be eerie, as in the brief but evocative sequence where we see Riseborough’s eyes in extreme close-up before she drives straight back to Marie’s home. Riseborough’s hardened expression is the emotional foundation for the movie’s climax, so if it doesn’t do much for you, you might not feel properly run over at the very end.

You might also find yourself about half-invested and half-underwhelmed by the movie’s alternatively hyper-pressurized and thin atmosphere. Even a surreal dream sequence leaves one feeling that what we’re looking at simultaneously tells us too much and not enough about what Laura’s going through, given its focus on unnerving children’s music and a brief, but memorably appearance by Dornan. I wonder if it’s possible to get more out of this movie if you go into it knowing that it’s less about emotional release and more about grief as an elusive and only partly sensible process.

It’s hard to know what else “Here Before” would have needed to work on its own terms, especially since, as genre devotees know, a good horror movie doesn’t need to meet any prefab criteria in order to be good. There’s certainly enough craft, soul, and intelligence on display to make Gregg’s movie worth a look. There’s also a few too many scenes that only succeed at repeating its evident fascination with grief as a personal and therefore only partly communicable experience. Sometimes the articulation of the writing on the wall—just above the coat-hook—doesn't matter as much as how much scrutiny it can stand up to.

Now playing in theaters and available on VOD on February 15th. 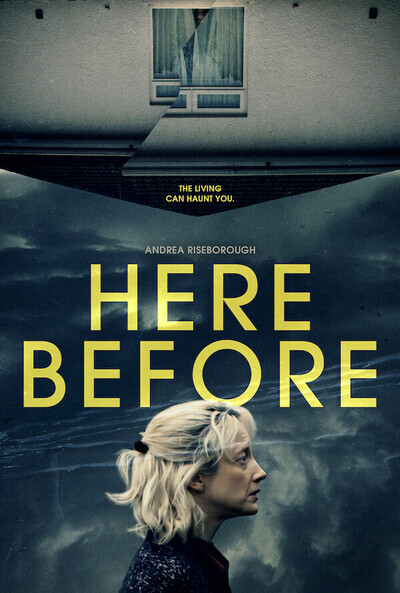