If “The Godfather” and “Succession” had an ostentatious lovechild, it would look something like Ridley Scott’s “House of Gucci,” the master’s sweeping yet wildly imbalanced rendering of the titular and celebrated fashion empire’s scandalous history, full of backstabbing, betrayal, greed, and even murder.

Based on the book by Sara Gay Forden, it’s a spicy enough foundation that comes with sufficient amounts of flamboyance, one that sees Lady Gaga convert into an ambitiously tacky character, features an unrecognizable Jared Leto dialing yet another transformative shtick up to eleven, and contains plenty of exaggerated English-spoken-with-an-Italian-accents that stretch and twist random words through cutely fluctuating emphases on every other syllable. “Then what’s the problem,” you might rightfully ask about a campy package that sounds wholly entertaining on a fashion-soaked, star-studded, feast-for-the-eyes canvas? It’s perhaps helpful to quote a character here, who assigns the shorthand of “a movie set” to the propped and preppy Ralph Lauren, “a rock concert” to the vibrant showiness of Versace, and “the Vatican of fashion” to the refined legacy of Gucci. Now, imagine all these dissimilar looks on a hodgepodge runway that’s supposed to reflect the voice of a single designer. That confusing collection is “House of Gucci,” a film that would have benefited from a coherent silhouette and a little hemming of its tiresome runtime.

Still, Scott’s soapy epic—his second cinematic outing this year after the superior (and also partly campy) “The Last Duel”—isn’t exactly a bore, thanks to a number of its actors (like Leto) unafraid to lean into the film’s kitschy tone as well as some fearless moments—like one sensationally go-for-broke sex scene—that meet them at that amplified level.

A fierce Lady Gaga leads the pack in an uneven performance, portraying Patrizia Reggiani—an assertive young woman from limited means who falls in love with and marries Maurizio Gucci (a disproportionately subdued Adam Driver), the dreamboat scion of the fashion house. When Patrizia gets rejected by shy Maurizio’s traditional and haughty father Rodolfo (Jeremy Irons)—he quietly shames Patrizia’s lack of cultural finesse—she finds a welcome ally in Uncle Aldo (Al Pacino). He is the quality and class-insistent Rodolfo’s calculating brother, with a commercialist attitude that differs from his sibling’s when it comes to reviving Gucci’s flailing image in the ‘70s and rising above the brand’s whispered-about financial hardship.

Also in the mix is Aldo’s son Paolo, brought to life by Jared Leto, whose outrageous (and extremely fun) gaudiness single-handedly earns the aforesaid “rock concert” analogy. Leto’s approach to the role instantly proves apt for Paolo, an incompetent businessman wannabe and an aspiring fashion designer with little taste and even less talent. Spite and bad-blood brew amongst the clan throughout the story that spans three decades, especially after Patrizia sneakily talks Maurizio out of his law school dreams, muscles her way into the family business, and turns her husband against pretty much every member of the family. Through it all, Salma Hayek’s naive psychic Pina guides the increasingly distraught queen-bee Patrizia with prophecies about the future, lending the film some of its most hysterical scenes.

If only the cast could decide what kind of a movie they were all in. You could say Adam Driver is excellent in the role of Maurizio, but his measured mannerisms feel so out-of-step with the version of “House of Gucci” that Leto or Hayek seem to think they’re in—in that regard, he operates in an entirely different movie, one that Lady Gaga occasionally joins in when she’s not on a different wavelength. You sense this tonal inconsistency elsewhere too, throughout the script by Becky Johnston and Roberto Bentivegna that alternates between a stern drama and a goofily heightened melodrama with a perverse sense of humor that scores various laughs, many of them unintentional. It’s only when the film has the audacity to embrace the latter part of its split personality that “House of Gucci” works, even soars. But that confidence unfortunately doesn’t come to fruition often. The resulting film rapidly loses steam in its last act, while it tails the ill-fated and once vulnerable Maurizio as he willingly steps to the dark side of his powers like a Michael Corleone with slicker fashion sense and revitalizes Gucci as the multi-billion-dollar premier designer we know today. (Reeve Carney makes a good up-and-coming Tom Ford in these segments.)

Unsurprisingly, visual design is how “House of Gucci” leaves its strongest impression. With a story set across Rome, Milan, New York and even the Alps—where Maurizio and Patrizia vacation, and an incredible Camille Cottin makes an appearance as Maurizio’s romantic-interest-to-be—the movie highlights the luxury and lavishness of the Gucci lifestyle with grace and utmost attention to detail through Arthur Max’s intricate production design. (Most of the film was apparently shot in and around Rome as well as the storied Cinnecitta for the interiors.) Costumer Janty Yates predictably comes out of the project as its MVP, especially in the way she sculpts Lady Gaga’s Gina Lollobrigida-esque looks and character journey—from her early flouncy unworldliness to her sharply cut outfits and later on, vulgar getups—and informs the actor’s performance that veers into something animalistic. Perhaps more impressively, the designer’s impeccable suiting (made mostly bespoke by a NY-based tailor, with additional pieces by Ermenegildo Zegna) brings out the neatly combed Driver’s masculine elegance in a way no film ever has.

But these visuals are just a special-effects of sorts, elements that keep “House of Gucci” on its feet when the film trips on its overlong train elsewhere. You come to it for a sophisticated boutique experience, but what you walk out of feels awfully close to an overstuffed department store. 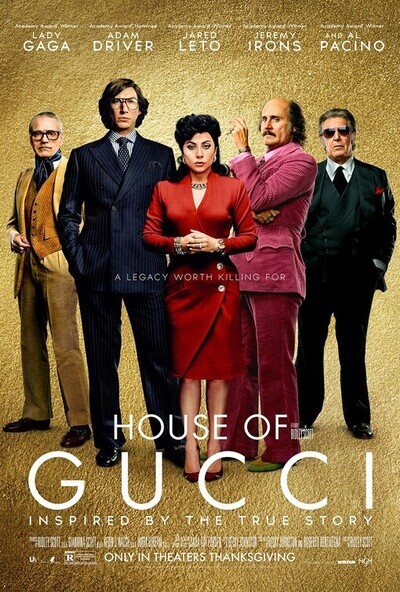 Rated R for language, some sexual content, and brief nudity and violence.

Writer (based on the book by)