Losing all recollection of the past would be like returning a person to factory settings. One would have the standard qualities of humanity, but not the lived-in experiences that come from success, failure, and being around other people.

Vanessa Kirby is challenged with manifesting such an experience in the mildly auspicious if ultimately disappointing “Italian Studies.” From writer/director Adam Leon, this nebulous drama follows a woman (Kirby) incapable of remembering her name and all other details about her identity.

One mundane day, she walks into a hardware store. By the time she steps out, it's as if a switch has been flipped and she has forgotten everything. Disoriented, she then wanders through the city directionless for what could be a single night or several days. As Kirby’s character walks the streets, sometimes her endless stride is captured from afar and from above, as if being watched over, while there’s a sense of being close with her amid the over-stimulating urban chaos. The soundscape that accompanies the imagery, of voices and noises overstepping each other’s sonic boundaries, heightens our confusion. Flaring nightlights pair with the energetic and eclectic camera movements by cinematographer Brett Jutkiewicz, whose transfixing work enshrouds the story.

Even if the inebriating effect of these choices wears out after the first few scenes, the way the editing team (four editors are credited) create what can be described as cinematic synapses with a stream-of-consciousness type of fluidity makes for something more compelling as an experiential piece than a narrative one.

As a blank slate with no past and none of its baggage, the woman responds to impulses, to the impetus of spontaneous interpersonal connections, and to her biological needs. She ignores all socially dictated apprehensions of speaking with strangers, and, furthermore, she agrees to hanging out with them. With her cleared head comes a level of reckless freedom, of constant reinvention; she catches up with the lies she has made up along the way, making us wonder if memory has only been a burden to our enjoyment of life all along.

Considering how Kirby’s character behaves throughout the ordeal due to her cognitive condition, one realizes that the compassion and understanding granted to her might not be the same if the lead had been a person of color. Being a white woman in trendy clothing, those around find her eccentric, not threatening, even as she acts erratically.

But will she, even on a subconscious level, recall this equally frightening and exhilarating privilege to go with the flow? An early scene confirms that this lapse might be only temporary, but offers no other details. Yet, as tantalizing as piecing the misleading information together can be, Leon’s commitment to ambiguity isn’t enough to convince one to surrender entirely to sensations and worry not about what it all means.

Halfway through, Kirby’s woman discovers that she might be Alina Reynolds, the author of a collection of short stories titled Italian Studies, which changes her perception of herself. Though effective in conveying uncertainty and bewilderment, her performance is, unfortunately, rendered one-note since she rarely comes out of the perpetually hazy mode: staring into the distance. The film's scene-stealer is Simon Brickner, who plays a teen from a troubled household that crosses her path and brings her into his clique. Brickner's performance has a goofy and vulnerable charm.

As this episode progresses, now with the pretense that she may be a writer, Leon begins to alternate between Kirby and a younger iteration of the character. Leon also intersperses interviews with Simon’s friends, working through their feelings. These passages are emotionally gratifying though schematic; the lines between memory and reality have been crossed too many times at this point, achieving a deliberate lack of clarity.

Frustrating in its repetitiveness, Leon’s third feature is like a narrative exercise fascinated by both memory and youth. "Italian Studies" relentlessly experiments with form, but fails to fully congeal.

Now playing in theaters and available on demand. 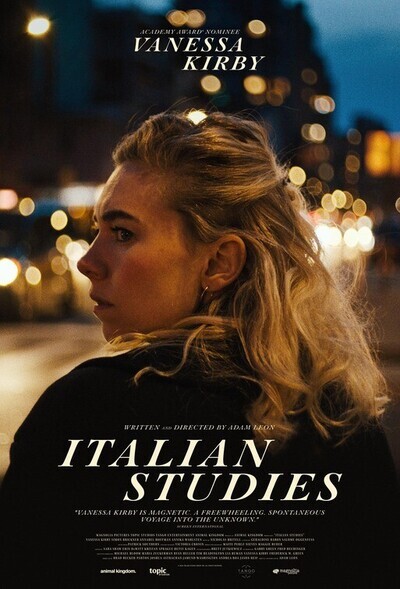