If you’ve ever been enchanted by the mouthwatering food photos on your Instagram feed and gladly shared a few visuals of your own gastronomic adventures, then you have celebrated chef Julia Child to thank for planting those culinary seeds in America. In their conventional yet lovingly fragrant documentary “Julia,” co-directors Julie Cohen and Betsy West make a convincing case that Child was the woman who started it all on this side of the Atlantic, empowering millions of everyday men and women to become accomplished chefs of their own right.

Not that the Oscar-nominated co-directors of the equally endearing (but superior) “RBG” needed to prove that point at all—the distinguished Child’s effect on average American household cooks and impact on food culture at large has already been well documented and aptly fêted. But with a light, inclusive and conversational touch as well as a fun attitude—qualities that also define the fascinating subject at the heart of their film—the co-directors manage to whip up a highly engaging documentary anyway, stirring in pieces of archival footage, old photographs, and contemporary talking heads interviews into their stew with well-managed proportions.

The above is an awfully standard recipe for sure, especially when it comes to biography-style documentaries. In that regard, “Julia” sometimes feels a bit too safe for its own good. Then again, sometimes keeping already flavorful topics simple (and topping them with heaps of butter, like Child would endorse) is not a formula that needs too much tinkering with—Cohen and West seem to know this fact well enough to stick with it until the end. And to their credit, the filmmakers still shake things up a bit and come up with an idea that operates like a cinematic butter to their bread. In segments sensuously filmed by renowned non-fiction cinematographer Claudia Raschke (also of “Fauci” this year), the duo bring to life a few of Child’s most popular dishes—things like boeuf bourguignon, sole meunière, and a to-die-for poached pear tart—supervised and styled by Susan Spungen, an established author and food stylist who was also similarly in charge during Nora Ephron’s “Julie and Julia.”

The connection between the two projects somehow doesn’t go any further than sharing this artisanal credit however—you won’t hear even a passing reference to the 2009 Meryl Streep starrer here, even though that movie, for better or worse, has become a significant part of Child’s late legacy in popular culture. But that omission admittedly doesn’t reduce the juiciness of “Julia,” which starts from the icon’s privileged upbringing in Pasadena in a wealthy and conservative-leaning family and extends itself to her final (and still inspiringly productive) years before her passing in 2004 at 91 years of age. It’s a pretty comprehensive spread that patiently yet economically walks the viewer through Child’s wide and varied life before she became famous. Once she joined the Office of Strategic Services during World War II, her international travels—thus, growing appetite for different cultures and cuisines—took hold. It was also during this time that she met her liberal, supportive and adventurous husband Paul, a free-thinker whose influence helped transformed Child both artistically and politically.

Those who watched “RBG” already know that West and Cohen are romantics at heart, a characteristic they also infuse into “Julia” in portraying her envy-inducing marriage to Paul. Often, ornately penned musings and exchanges between the couple appear on the screen to gushing effect, embellishing the words and remembrances of several of her family members, friends and the eminent likes of André Cointreau, Ina Garten, and Marcus Samuelsson. Child’s rise to fame predictably lends the film its most dependable jolt once the late-bloomer registers at the largely male-driven cooking school Le Cordon Bleu, challenges the status quo in more ways than one, publishes her seminal 1961 cookbook (co-authored by Simone Beck and Louisette Bertholle), and becomes a reliable TV personality, once famously sketched by Dan Aykroyd in an "SNL" episode. (A little spoiler alert here is, the spell of “Julia” will make you want to dust off your old copy of Mastering the Art of French Cooking and dive into a few recipes right away.)

Elsewhere, the co-directors gleefully honor the larger-than-life’s character’s colorful personality while also not shying away from some of the more challenging tidbits about her life—such as her homophobia before she became a vocal AIDS and gay rights activist and certain unpalatable dismissal of feminism, even as someone who was resolutely pro-choice. On the whole, “Julia” won’t be the most groundbreaking meal you’ve ever had, but you’ll leave the table comforted and satisfied, in a state of bliss that Child would very much approve of. 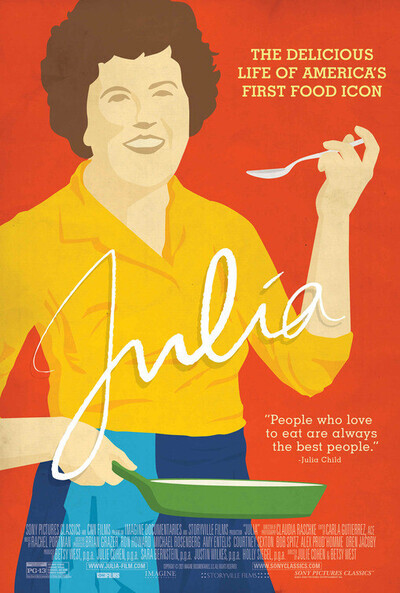 Julia Child as Self (archive footage)

José Andrés Puerta as Self

Ruth Reichl as Self

Cecile Richards as Self

Marcus Samuelsson as Self