Mariama Diallo’s “Master” does not work as a horror movie. It is not even remotely scary, its story and lore are confusing and underdeveloped, and the real-life microaggressions it throws at its characters are so familiar to viewers of color that they’re nowhere near as shocking nor surprising as the film thinks they are. The African-American characters in the movie are all victims, completely devoid of anything but trauma and fear, and who act toward one another in ways we would not act in White spaces. I cannot help but bring my own experiences into a movie like this, especially when the characters are going through something I have been through as well. And while I don’t expect absolute realism in a film, especially a horror film, this one wants to play both sides of the reality fence. So, I must play along.

When the movie opens, Gail Bishop (Regina Hall) is stepping into her role as the first Black “master” of a predominantly White institution in New England. She previously attended the school, and is a tenured professor there as well. Her story is presented in parallel with Jasmine (Zoe Renee), a freshman moving into the dorms. When the student handing out room numbers notices what room Jasmine is in, she calls over her other White colleagues and says “guys, she got THE ROOM!” When asked what’s so special about “the room,” the student issues her a snarky welcome and walks away.

“The room,” as Jasmine’s roommate’s boyfriend Tyler (Will Hochman) explains, is where a gruesome death occurred. It has something to do with the curse of Margaret Millet, a woman assumed to be a witch who was dispatched not too far from the campus. Since the school is as old as America is, Millet’s ghost haunts it and, at 3:33 on December 3rd, she shows up to kill the student who lives there. “She drags them to Hell,” Tyler says. It just so happens that it’s always a Black student because, I assume, when Maggie wasn’t engaging in black magic, she was doing all sorts of racist things. This ghost story scares the natural curls out of Jasmine’s hair; in the next scene, it looks like she has an Ultra-Perm.

I questioned if Jasmine’s new hairstyle was a means of fitting in, but Diallo’s script never once gives us any insight into who Jasmine is. She’s an enigma who sleepwalks and is prone to visions that are supposed to be terrifying but come off as poorly rendered afterthoughts. The witch is really after her, but it’s nothing compared to real life. Or maybe it’s symbolic of real life? The movie is too much in shambles to clarify. Meanwhile, Jasmine’s White roommate and the other students issue all sorts of microaggressions, from saying she looks like Beyoncé to screaming out rap lyrics containing the N-word (in a party scene that is surreal and brutally effective). Despite the fact that there are a few other Black students on campus, we never see Jasmine interact with one until late in the film; its protracted nature is incredibly frustrating as it’s an intriguing indication of where “Master” might have gone.

At least Gail has a running buddy, her fellow African-American teacher Liv (Amber Gray). Liv is up for tenure, but that promotion is threatened when Jasmine files a motion against her for flunking her over a paper. The assignment was to look at The Scarlet Letter through the prism of race. Jasmine can’t imagine how to frame that, so she gets an F despite her paper being well-written. Her White classmate, however, spun a ridiculous amount of malarkey even she didn’t buy into, and obtained a B+. I started to wonder: Was Liv’s grade an attempt to prove to the tenure committee that she wasn’t giving preferential treatment to one of the school’s only minority students?

I had even more questions about her relationship with Gail. It’s supposed to be friendly, but it’s really icy, even when Liv is offering her a modicum of support. “You feel like a house n---er,” she says at one point, pointing out how Gail is essentially a diversity hire to make the school look good. Her tenure is very likely that as well, but it’s in jeopardy. In satiric fashion, Diallo shoots Gail’s White colleagues on the tenure committee so garishly they look like R. Crumb drawings. When Gail is among them, she looks visually smaller and more realistic.

You may have forgotten about that witch, but the movie sure hasn’t. She’s haunting Gail, too, leading to several scenes where Hall has to act terrified while hearing a bell or seeing a pile of maggots—this movie likes maggots. To her credit, she gives a decent performance despite how poorly her character is written. There’s a missed opportunity for Gail to be a friend to Jasmine, considering she also knows what it’s like to be a rare minority on campus (“there were three of us and we kept getting mistaken for each other,” she tells Jasmine). Instead, for reasons I can’t comprehend, Gail tells Jasmine she should return to the school after she’s nearly killed by supernatural forces. “You can’t escape it,” she tells her, with the “it” being racism. Maybe not, but you shouldn’t go back to the place it definitively resides, either.

That message really bugged me, as the film seemed to be saying “just give up.” Jasmine’s ultimate fate led me to that conclusion. But even worse is the film’s “plot twist,” which is so hilariously miscalculated that any potential message we could glean from it is lost. When a movie makes you think of Rachel Dolezal, it’s not helping itself. Additionally, Gail’s last scene will make you wonder why you sat through “Master.”

Who is this movie for? I know I ask that question often here but it’s a good question. Black folks don’t need the classes in Racism 101 “Master” offers; life gives us PhD’s early on. It’s not for horror fans because it’s a complete failure as a horror movie. Plus the film does not seem knowledgeable about Blacks in academia nor the feeling one gets when you’re in an all-White space and you discover there’s someone else who looks like you. So, is it a lesson for White viewers? I’ll tell you what it’s not: It’s not another “Get Out” as many of the reviews coming out of this year's Sundance proclaimed. Black movies always get compared with other well-known Black movies whether they’re similar or not. Now that’s a microaggression that should be murdered by a witch. 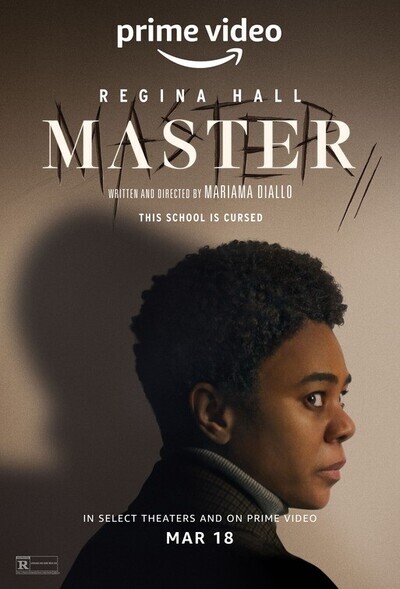 Rated R for language and some drug use.

about 18 hours ago
Advertisement