Christina Ricci does most, if not all, of the emotional lifting in the lightweight horror drama “Monstrous,” a period piece about a single mom and her son who, in 1955, run away from home and re-settle in an isolated lakeside house. Ricci plays Laura Butler, an independent, emotionally fragile single mom who tries to escape her past—particularly her ex-husband—but finds it anyway in her new home, which is also haunted by a Gilman-like seaweed monster.

The monster in question doesn’t always look great—this is a Chicken Soup for the Soul Entertainment production—and there’s not much to the tired plot twists that ultimately help viewers to better understand Laura and Cody (Santino Barnard), her withdrawn seven-year-old son. But Ricci’s compelling performance, with essential support from director Chris Sivertson (“All Cheerleaders Die,” “I Know Who Killed Me”), makes you want to follow Laura as she inevitably falls apart.

The plot of “Monstrous” develops incrementally through canned revelations that Laura has tried to suppress. We overhear, through an establishing phone conversation, that she’s avoiding Cody’s father. And we see, through a dream sequence that resembles a scene from “The Creature from the Black Lagoon,” that Laura’s worried about a mysterious brunette (Rachel Edlow).

Both the phone call and the dream intrude on Laura’s world of cozy 1950s décor and dreamy pop songs, like “I Don’t Want to Set the World on Fire” and “Mr. Sandman.” She tries to remain in that positive emotional space even when she’s applying herself at a nearby secretarial pool. But Cody’s having nightmares about a lake monster and, despite his mom’s wishes, he doesn’t want to make new friends at school. Laura tries to get some help—with her new home, at least—from the property’s reassuring owner, Mr. Langtree (Don Durrell), but he’s only so useful.

Ricci does a lot of heavy-lifting in this sketchy scenario, scripted by Caroline Chrest, and mostly fleshed out by director of photography Senda Bonnet, production designer Mars Feehery, and their respective teams. Floral wallpaper and a matching yellow refrigerator, filmed in inviting wide angles, help viewer understand the appeal of Laura’s new home. Cody’s relatively claustrophobic visions of a kelpy corpse monster aren’t as inspiring since they’re both too glossy and conceptually thin to effectively place us in the little guy’s shoes.

But that’s unsurprising since most of “Monstrous” either concerns or reflects Laura’s point-of-view. She provides the needle’s eye we see the movie’s world through, which inadvertently makes Ricci’s performance even more remarkable. She brings a vulnerability to her character that’s apparent even when Laura tries to reassure Cody. And when Laura does see something weird in her house, moving just off-camera, Ricci’s tightly-blocked over-the-shoulder stare conveys more tension than any of the movie’s dialogue or creature effects. That said, nobody else in the movie matches Ricci or her energy. Barnard’s performances gets swallowed up by his Romero zombie pale complexion, and the only semi-central character who can keep up with Ricci is Lenora (Colleen Camp), Mr. Langtree’s grouchy wife.

Ricci’s performance suggests a lot that’s left unsupported by an otherwise thin plot that seems to have been left intentionally underdeveloped. It’s easy to imagine this type of movie, like Sivertson’s unfortunate “I Know Who Killed Me” before it, as a complicated challenge to any viewers who want to identify with Laura by disappearing into nostalgia. It doesn’t seem to be a coincidence that Ricci’s character shares a first name with Laura Palmer, the archetypal lost girl from David Lynch and Mark Frost’s formative avant soap opera “Twin Peaks.” “I Know Who Killed Me” feels like more of a mash note to “Twin Peaks” than “Monstrous”—among other influences, like Lynch’s “Blue Velvet” and Brian De Palma’s “Dressed to Kill”—but “Monstrous” also rides an uneasy edge between camp and kitsch. At least “Monstrous” goes down easier since Ricci’s Laura doesn’t keep telling us and everyone around her that we don’t really know her.

There’s a clarifying moment later on in “Monstrous,” when the local police eventually have to interrogate Laura. At this point in the movie, we’re moments away from a big breakthrough since Laura’s narrative has already started to collapse. That climactic moment’s not big enough, but Ricci carries herself well enough.

It’s also fun to see Laura stand up for herself in later conversations with Mrs. Langtree, mostly because Camp matches Ricci’s intense, commanding screen presence. She goes as far as her role and director will let her. Whether that’s far enough depends on how invested you are in Laura, a vague symbol that sometimes acts like a sensible, human character. 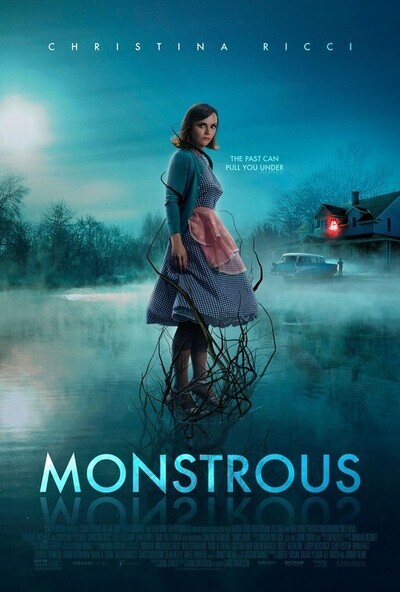