Space is rife territory for an original romantic comedy, especially one about long distance relationships. “Moonshot,” which places young adults on a slow adventure to Mars that’s basically a road trip through the final frontier, doesn’t take advantage of this enough. But it’s an amusing diversion because of the two mismatched people at the center played by Cole Sprouse and Lana Condor.

“Moonshot” does not concern the moon but Mars, a planet in which some people live. The year is 2049, and barista assistant Walt (Sprouse) is fixated on getting to Mars, having applied over 30 times to the Kovi space program and being rejected. His desire is enflamed even more when he instantly falls for a future astronaut named Ginny (Emily Rudd), who hops on a shuttle the morning after they meet. Sharing Walt’s woes, though not seeing eye-to-eye, is Sophie (Condor), whose boyfriend Calvin (Mason Gooding) is up on Mars and will be for a long time.

Walt and Sophie become an unlikely pair, mostly in that Walt’s fast-talking ways and clinginess somehow convince Sophie to sneak him into the ship she’s boarding, after she finally decides to buy a “civilian” ride for nearly a million dollars. Desperate to be with Ginny, he rides up in an escape pod, and then when it’s time for the voyage to Mars from a station, he plans on hiding in the air ducts. Though she’s annoyed and in danger herself, she decides to help him, so much that Walt pretends to be Calvin through a fake ID mixup.

How does Walt get around all of this without getting caught? The movie has an amusing explanation later on, but even with that in hindsight one wishes it were more airtight with its premise, and its presentation of space travel security protocols. This lazy gap in believability (along with not explaining until later how she can afford a ticket) then defines other parts of “Moonshot,” which has the out-of-this-world location, and a compelling cast, but not a great imagination of what to do with them. Even the hijinks as Walt and Sophie bide their time during this voyage are pretty mild, supported by quirky sitcom-like characters who smile and continue to soften the story’s edges. Despite its charms, “Moonshot” can only offer glimmers: the possibility of its adventure, or that its slightly off-kilter sense of humor that might carry us away.

Sprouse and Condor are the main reason to watch this movie, for their chemistry that also leaves you wanting more. Sprouse is a little too cozy with his character’s post-Ryan Reynolds motormouth ways, charming any character by forcing his presence upon them. Condor, meanwhile, is endearing and earnest with her character’s dedication to goals, not realizing they are her boyfriend’s. But the script is limited on how to make her feel more alive; Sophie has a funny, quirky habit of dancing when under stress, but we don’t get more of that kind of color to her character. An emotional subplot about Sophie feeling a sense of loyalty to her boyfriend, and his family (it’s a long story) doesn’t blossom. And while Condor is going to be a megastar—the “To All the Boys I’ve Loved Before” movies proved that—you just don’t see that here.

Naturally, Zach Braff shows up in the movie later as Leon Kovi, the Elon Musk-like billionaire who makes this type interstellar travel possible, opening a third act that’s more about Walt and Sophie’s half-baked inner journeys than a gripping adventure set on Mars. Kovi has some plans for stowaway Walt that are, endemically, inconsequential and cute at best. Even this change of course in the third act is a bit rushed and emotionally underwhelming, despite the anticipation of Mars as the planet where relationships are long-distance no more.

“Moonshot” is the kind of movie that’s frustrating because of what makes it endearing—there’s so much that makes you wish it were more original. No rom-com set in space should feel this ordinary. 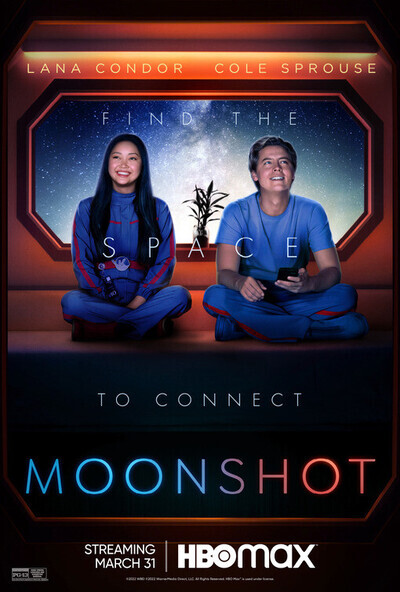 Rated PG-13 for some strong language and suggestive material.

about 22 hours ago
Advertisement