“Mothering Sunday” isn’t a work of memoir. It’s based on a novel by prize-winning British author Graham Swift, adapted for the screen by “Lady Macbeth” scribe Alice Birch. But it feels like one. The storytelling is impressionistic and sensual, capturing those fleeting images—a coattail flapping in a spring breeze, the outline of a lover’s mouth—that linger in the memory after the specifics of a moment are long gone. It’s both about one momentous day in a woman’s life, and how its events influenced everything she did afterwards. It’s a story (deep inhale) about storytelling, and about what makes someone want, or perhaps need, to become a writer.

Jane Fairchild (Odessa Young) points to three events: The day she was born, the day her boss gifted her a typewriter, and another day she won’t reveal. But according to Donald (Sope Dirisu), one of the two loves of Jane’s life, Jane’s experience working as a maid is what set her on this creative path. His theory is that working in service made Jane “an occupational observer of humanity,” someone whose role is to stand silently to one side and watch the foibles of the wealthy unfold. Store those up long enough, and how could you not get a novel out of it?

Another role of a servant is to keep the wealthy’s secrets. And on the sunny May afternoon in 1924 that forms the backbone of “Mothering Sunday,” Jane was busy with her favorite confidence: Her years-long affair with Paul Sheringham (Josh O’Connor), the last surviving male heir of an aristocratic family. The affair is fraught enough, given Jane and Paul’s class differences and the fact that Paul’s parents are good friends with Jane’s employers, Mr. and Mrs. Niven (Colin Firth and Olivia Colman). But in just 11 days, Paul will also get hitched to a more “suitable” (i.e., upper-class) woman, Emma Hobday (Emma D’Arcy).

But the fact that her lover is marrying another woman isn’t the reason why Jane can’t let go of that day. “Mothering Sunday” jumps between past, present, and future, covering moments in Jane’s life from adolescence through her old age. But it always returns to Mother’s Day, 1924. At first, this seems like a nostalgic tale of lost love. Then, it shifts into a mournful reflection on the soul-shattering national and personal trauma of World War I. Finally, it transforms once more, into a meditation on the creative process and falling in love with words. Unfortunately, however, it’s not enough of any of those things to make a profound impact.

Fans of Dirisu, who made such an impact in Netflix’s “His House,” and Colman, who makes an impact in everything she does, will feel similarly underwhelmed. Both are confined to small supporting roles with narrow range: They’re both tragic figures, there to put the “bitter” in Jane’s bittersweet tale. Colman, an expert in playing repressed upper-class maternal figures thanks to her role as Queen Elizabeth II on “The Crown,” can screw her mouth tight as tears well in her eyes with the best of them. But while her character’s suffering is sympathetic, it has nothing on the thrilling emotional complexity of her performance in “The Lost Daughter.”

And so, amid the thousand-yard stares and hands caressing elegantly bound books, two things stand out: Extended full-frontal nudity from Young and O’Connor—a.k.a. Prince Charles on “The Crown”—and the film’s ambitious nonlinear structure. To director Eva Husson’s credit, the story is never hard to follow. And “Mothering Sunday” is assembled in such a way that the significance of certain words and objects is revealed naturally over time, like rock formations revealed by the ebbing of the tide.

Husson’s kaleidoscopic approach also gives Jane a rich, palpable inner life. Without having to state these things directly, the film conveys Jane’s conflicting feelings about her years as a maid, and how reading became a way out that was both temporary (losing herself in a good adventure story) and permanent (quitting her job with the Nivens to work in a bookshop). Combined with a vivid color palette and poetic close-ups, the direction accomplishes what it sets out to do: Evoke Jane’s fictionalized memories as vividly as if they were the viewer’s own.

But the story—as harsh as it is to say this about a movie where many young men are dead and many more are still to die—somehow manages to be both weighty and inconsequential. Both Colman and O’Connor come to “Mothering Sunday” from a longer, more in-depth exploration of the familial consequences of stiff-upper-lip British manners. And although the film hits a variety of emotional notes as it flits across time and space, the events tied to these sensations too often revert to one-note tragedy. On an intuitive, sensual level, “Mothering Sunday” is intoxicating. As a story with plot and characters, it’s nothing we haven’t seen before.

The Mystery of Marilyn Monroe: The Unheard Tapes 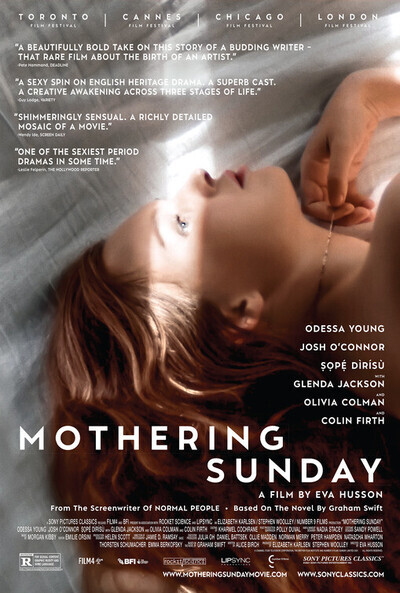 Rated R for sexual content, graphic nudity and some language.