I have no idea why Rob Reiner, or anyone else, wanted to make this story into a movie, and close examination of the film itself is no help. "North" is one of the most unpleasant, contrived, artificial, cloying experiences I've had at the movies. To call it manipulative would be inaccurate; it has an ambition to manipulate, but fails.

The film stars Elijah Wood, who is a wonderful young actor (and if you don't believe me, watch his version of "The Adventures of Huck Finn"). Here he is stuck in a story that no actor, however wonderful, however young, should be punished with. He plays a kid with inattentive parents, who decides to go into court, free himself of them, and go on a worldwide search for nicer parents.

This idea is deeply flawed. Children do not lightly separate from their parents - and certainly not on the evidence provided here, where the great parental sin is not paying attention to their kid at the dinner table. The parents (Julia Louis-Dreyfus and Jason Alexander) have provided little North with what looks like a million-dollar house in a Frank Capra neighborhood, all on dad's salary as a pants inspector. And, yes, I know that is supposed to be a fantasy, but the pants-inspecting jokes are only the first of several truly awful episodes in this film.

North goes into court, where the judge is Alan Arkin, proving without the slightest shadow of a doubt that he should never, ever appear again in public with any material even vaguely inspired by Groucho Marx. North's case hits the headlines, and since he is such an all-star overachiever, offers pour in from would-be parents all over the world, leading to an odyssey that takes him to Texas, Hawaii, Alaska, and elsewhere.

What is the point of the scenes with the auditioning parents? (The victimized actors range from Dan Aykroyd as a Texan to Kathy Bates as an Eskimo). They are all seen as broad, desperate comic caricatures. They are not funny. They are not touching. There is no truth in them. They don't even work as parodies. There is an idiocy here that seems almost intentional, as if the filmmakers plotted to leave anything of interest or entertainment value out of these episodes.

North is followed on his travels by a mysterious character who appears in many guises. He is the Easter bunny, a cowboy, a beach bum, and a Federal Express driver who works in several product plugs.

Funny, thinks North; this guy looks familiar. And so he is. All of the manifestations are played by Bruce Willis, who is not funny, or helpful, in any of them.

I hold it as an item of faith that Rob Reiner is a gifted filmmaker; among his credits are "This Is Spinal Tap," "The Sure Thing," "The Princess Bride," "Stand By Me," "When Harry Met Sally...," and "Misery." I list those titles as an incantation against this one.

"North" is a bad film - one of the worst movies ever made. But it is not by a bad filmmaker, and must represent some sort of lapse from which Reiner will recover - possibly sooner than I will. 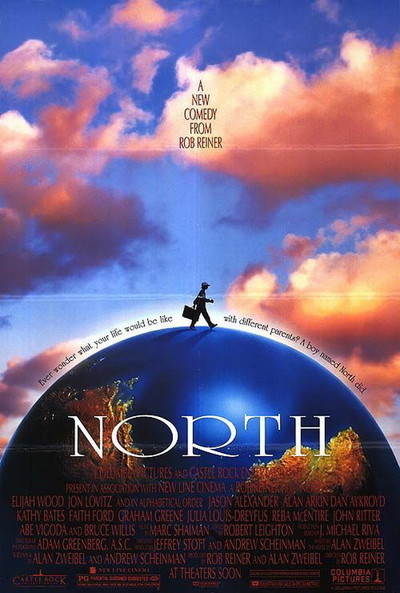 Rated PG For A Few Words

Based On A Novel by