Given the Sisyphean nature of independent movie-making, Mickey Keating is impressively prolific. Since 2011, Keating has directed six feature length (and one not-quite-feature-length) indie horror movies, all of them modest in scale and bold in their aggregation of influences. Some of these films are more successful than others, and not necessarily for the reasons you might expect. But they have a common thread of pairing controlled style with clunky drama—which, to be fair, is a common issue in the movies that inspire the writer/director. That’s what’s confusing about Keating's latest, “Offseason”: Where is the line between shoddy filmmaking and a loving pastiche of films that were shoddily made?

Opening with a letter advising celebrity offspring Marie (Jocelin Donahue, “The House Of The Devil”) to come to her mother’s hometown to inspect her grave for vandalism—shades of the original “Texas Chain Saw Massacre”—“Offseason” makes aesthetically pleasing use out of an abandoned Florida beach town in winter. The premise recalls the 1973 deep cut “‘Messiah Of Evil,” with a hint of 1979’s “Tourist Trap” thanks to all the mannequins. It's a simple story, driven by generational curses and a Lovecraftian demigod who demands terrible sacrifices from the defenseless townies of Lone Palm Beach, Florida.

And once Marie and her boyfriend George (Joe Swanberg) cross the lone drawbridge that leads into (and out of) Lone Palm Beach, their fates are already determined. That lends a certain aimlessness to the plot, which often seems to be running in circles just to keep moving. But given that Keating’s primary concern as a director is creating atmosphere—not an inherently bad thing, to be clear—this point isn’t as tedious as it could be. The tropical gothic aesthetic is appealing enough to carry the film at least part way, building a “neon through the fog” aura out of saw palmettos, chilly beaches, mushy swamp graveyards, overseas highways, overcast skies, and several thousand gallons of fog machine fluid.

The sound editing, by longtime Keaton collaborator Shawn Duffy, is also a spooky treat, utilizing a full range of hair-raising sounds from sinister whispering to animalistic shrieks. There’s no doubt that this director and his crew know how to extract maximum production value out of minimal resources: For example, the visual effects are sparingly applied. But the awe-inspiring nightmare imagery they create looms over the film, both literally and metaphorically.

The performances are more mixed. Underappreciated genre asset Richard Brake (“31,” “Bingo Hell”) makes an outsized impression in a small role, thanks to his impassioned speech on a windswept bridge once everything goes to shit. But unless Keating is paying homage to the inert monologues, overly declarative dialogue, and stilted line readings in films from genre masters like Lucio Fulci, those elements of the film simply don’t come together in a convincing way. The leads in particular struggle to find their footing: Swanberg just seems out of place, while Donahue never strikes a balance between panic and resignation that really works for her character.

Again, if editor Valerie Krulfeifer, who’s worked with Keating on six out of his seven films, was leaving just a little too much space in between when one character speaks and another character responds as a tribute to the bad editing in ‘70s B-movies, that would be—well, it would be rather brilliant. But if that’s what they’re up to with “Offseason,” Keating and company may be smuggling their intentions a little too well.

The glorious imperfections of grindhouse favorites are the sort of thing that have to be appreciated on their own unique merits, divorced from conventional measurements of quality. With a movie like “Offseason,” you can tell that the filmmaker knows what the usual benchmarks for a “good movie” are—something you can’t say for all B-movie directors—and Keating does achieve them in some aspects of the production. That’s what makes it so confounding when other elements don’t live up to those standards. Is “Offseason” half of a joke, or just a halfway decent film? Either way, it’s an awkward question to ask.

On VOD and in limited theaters March 11. 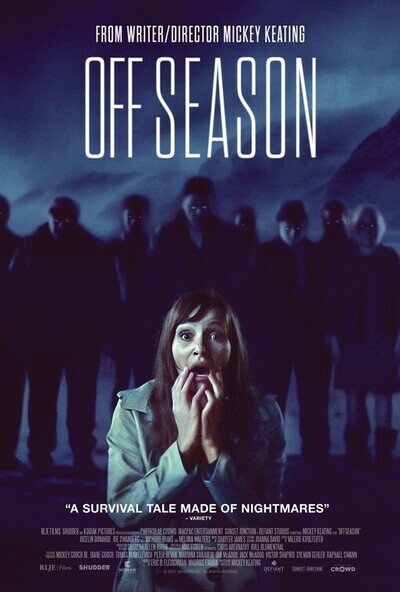 Richard Brake as The Bridge Man

Jeremy Gardner as The Fisherman