Jacques Audiard, a director who typically makes “Very Serious Dramas” like “A Prophet” and “Dheepan,” switches gears for a playful, sexy study of young lives in the city of lights in the charming “Paris, 13th District.” It sounds cheesy to say that Audiard’s film, based on the novels by Adrian Tomine and co-written by the wonderful Celine Sciamma (“Petite Maman,” “Portrait of a Lady on Fire”) is about “how people connect in the modern era” but that’s certainly a big part of it. It’s not coincidental that relationships form in this film through misunderstandings. Two people’s lives are changed when a woman looking for a roommate thinks that Camille can only be a woman’s name; another character’s life is upended when she is mistakenly identified as a cam girl. We are constantly getting each other wrong nowadays, aren't we? People hook up and pull apart again in Audiard's film, thinking that the casual sex is just another random part of their day, but each of these relationships impact the way that one bounces to the next. Audiard can sometimes lose the overall thread here, but his skill with performers holds the project together, and it’s interesting to see a movie about sexually active young people that doesn’t judge them, but tries to understand their hopes and dreams, even the ones they know aren’t going to last longer than the next fling.

Known as “Les Olympiades” in France, Audiard’s film takes place in the Olympiades high rises, a community of buildings the director loves to frame in his gorgeous black and white—the idea being that we are merely glimpsing a handful of stories in this part of Paris, and every one of those lit windows could hold its own. He starts with a naked Émilie (Lucie Zhang), laying on a couch at night doing karaoke, filling the time of being a young woman on her own. The story really starts when Émilie puts out an ad for a new roommate and a young teacher named Camille (Makita Samba) responds. She rebuffs him at first, presuming Camille was a woman merely by his name, but the sexual tension is immediate, and she gives in. They’re fooling around before he’s even moved in. Of course, being a roommate and a lover comes with inherent problems, especially when it’s clear that Émilie takes the whole thing a bit more seriously than Camille.

Perhaps by virtue of combining multiple Tomine stories into one script, “Paris, 13th District” almost feels like it’s going to be a true episodic anthology after Émilie & Camille’s story gives way to the introduction of Nora (the phenomenal Noémie Merlant), a student who finds herself in a social nightmare when she’s mistaken for a cam girl named Amber Sweet (Jehnny Beth). Her classmates hurl sexually abusive insults at Nora, and the young woman decides to actually contact Amber to discuss the problem, leading to a unique relationship. Of course, Nora will also cross paths with Camille. It’s that kind of movie.

Audiard is invigorated by these vibrant, gorgeous young people, delivering one of the most sexually active films in years, even for the French. And his cast fearlessly work through their characters most private moments and emotions, leading to a movie that isn't voyeuristic as much as it is genuine. All of his performers disappear into their roles, but the MVP is “Portrait of a Lady on Fire” star Merlant, who sells what could have been a broadly wacky subplot from a Garry Marshall rom-com in a way that's believable. She’s a fascinating performer, able to convey the multiple conflicting emotions that can arise in a relationship without feeling forced.

If anything holds Audiard back here, it’s that the whole venture becomes a bit banal. We’ve seen stories of young dating culture so many times before—there’s a whole wing of HBO built from the profit of shows with structures and stories like this one—that I struggled to find what drew Audiard to this particular tale. He sometimes seems like he wants to unleash a little more visual flair, whether it’s in split screen that reminds viewers this is based on graphic novels or a brief burst of unexpected color in one scene, but the film is ultimately a bit too formally and narratively reserved.

Having said that, the raw, vulnerable performances transcend what could be framed as an overall lack of ambition on Audiard’s part. It's as if he fell in love with these characters, recognizing perhaps some of his youth in their successes and failures. It’s hard to blame him. Even if this kind of love is fleeting. 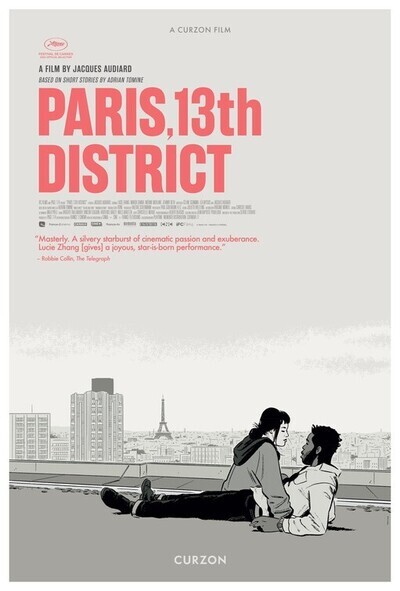 Rated R for strong sexual content throughout, graphic nudity, language and some drug use.