There’s a smaller and probably superior black comedy at the heart of “Schemes in Antiques,” a mainland Chinese action-adventure about the ignoble experts, grifters, and politicians who sell and preserve global antiques. "Schemes in Antiques” is about Yuan Xu (Jiayin Lei), a drunken antiques expert and electronics repairman who must find a priceless Buddha’s head statue in order to salvage his family’s poor reputation and also defeat Bu Ran Yao (Xian Li), his prissy rival. Yuan’s story, which was adapted from Ma Bo Young’s source novel, includes a few exciting plot twists (including the best use of morse code in a 2021 movie) and well-paced set pieces, so it’s often easy to ignore how silly the whole project is, despite its prevailing nature as a state-approved, would-be four-quadrant blockbuster about a plucky savant who works to restore his country’s heritage.

Really, the worst thing I can say about “Schemes in Antiques” is that it sometimes feels both overinflated and emotionally flat, especially when it’s more about character-driven drama and less about can-you-top-that scheming. Director Chi-Kin “Derek” Kwok is the movie’s real star, having previously co-helmed the assured crowdpleasers “Journey to the West: Conquering the Demons” and “Gallants.” The main difference in quality between those two earlier popcorn movies and “Schemes in Antiques” is that the setting of Kwok’s latest is more compelling than his generic characters.

Yuan is a placeholder hero, just another underestimated genius who’s momentarily inconvenienced by his last name. Decades ago, grandfather Yi Cheng (Xuan Zhao) betrayed the Plum Blossom Five, a patriotic group of antiques experts, by giving away a jade Buddha’s head to Japanese collector Yuzo Kido. Now, in the movie’s present day of 1992, Kido’s granddaughter (Lilie Matsumine) hopes to return the Tang Dynasty artifact to its rightful owners (ie: the Chinese government). Unfortunately, Miss Kido doesn’t possess the real Buddha’s head, but rather a sophisticated fake. Yuan sees this, because only he possesses the right combination of ingenuity and inside knowledge that’s needed to find the real Buddha’s head.

Yuan is also a fated hero, as he explains in almost as many words when he introduces us to Yi Cheng and the missing Buddha’s backstory. According to Yuan, viewers shouldn’t feel bad for the men in his family because his dad He Ping (Tao Guo) abandoned his family when Yuan was seven years old, and the whole Buddha head incident made the Xu family “pariahs of the antiques world.” That phrase alone is hilarious, but the makers of “Schemes in Antiques” aren’t really interested in challenging Yuan’s unbalanced self-image.

You still might want to check out “Schemes in Antiques” just to see Yuan get around various overweening antiques experts. Kwok knows how to build up even the flimsiest scene for maximum dramatic tension, both in terms of visual composition and moment-to-moment pacing, so his movie often feels bigger than its petty subjects. That’s no small victory given how often Yuan has to explain to what’s put him a few steps ahead of disbelieving opponents like Bu Ran.

Sometimes, Yuan’s explanations are illustrated with computer animation that oversells the jaw-dropping qualities of historic antiques. Other times, Kwok lets Yuan’s impenetrable, but assured decisions lead us and the plot around by the nose, as when Yuan and Bu Ran hunt for the next illuminating artifact at an illegal antiques market. We follow these two hucksters as they turn fellow scavengers and salesmen into happy accomplices, some more savvy than others. The climax of this scene doesn’t even concern the latest whatsit that Yuan and Bu Ran must acquire in order to finally locate the Buddha’s head. It’s really about the last-minute discovery that these two guys were never really pursuing the same thing. Even here, Yuan’s somehow a few steps ahead of us.

That said, “Schemes in Antiques” is ultimately about Yuan and his family. He realizes that the only way to succeed is by working with several prickly competitors, including Bu Ran, and those collaborations ultimately lead him to the movie’s pat, anti-climactic finale.

I’m not sure how Yuan’s story ends in Young’s novel, but there’s nothing in “Schemes in Antiques” that’s as attractive or as dynamic as Kwok’s presentation. Yuan is not interesting enough to warrant so much attention, and he never really goes anywhere unexpected or interesting enough to make you care if Yuan will succeed where both his dad and grand-dad failed.

“Schemes in Antiques” is, however, a pleasant enough time-waster whenever it’s racing towards its final destination. Kwok’s latest may run out of steam about 15-20 minutes before it ends, but it’s also fast and clever enough to keep you hoping that the next scene will be even bigger and better than the last show-stopper. 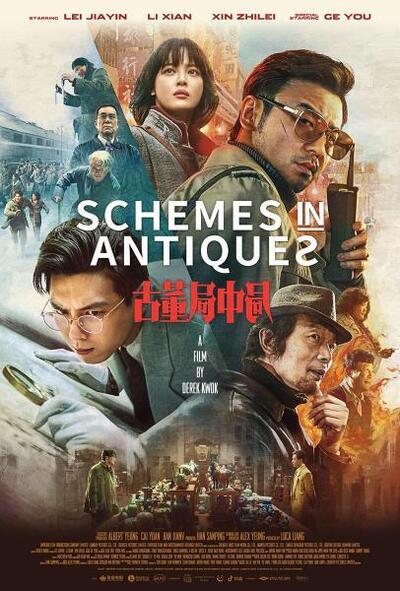 Tao Guo as He Ping

about 24 hours ago
Advertisement