The 2022 version of “Scream” is a film for viewers raised on the 1996 version of “Scream” and its three sequels. Whereas the first script by Kevin Williamson turned the kind of conversations that fans had about John Carpenter and Wes Craven in school cafeterias and coffee houses into something daring and riveting, the new script by James Vanderbilt and Guy Busick exists in a world where those conversations happen on a much larger scale in Discord chats, Reddit threads, and fan conventions. It's a horror film for a world in which everyone has an opinion on horror films. Luckily, it smartly balances references to the original movies in a way that (mostly) avoids the self-aware smugness that has killed many a “re-quel,” delivering a product that feels consistent with the first four movies but distinct enough to have its own voice. Some of Craven’s craftsmanship and skill with performers is lacking here, but by the time the film is rising to the rafters in its bonkers final act, I don't think any of the true horror fans in the audience will care.

Of course, “Scream” opens with a phone call—and, yes, it’s still a landline. Once again, a young woman home alone is forced to play movie trivia with a psychopath, but the manner in which this “Scream” will update the original is apparent early as Tara Carpenter (Jenna Ortega) says her favorite horror flick isn’t a slasher classic but an “elevated horror” film like “The Babadook.” How we define the horror genre has changed significantly in the last 25 years, as has the relationship between filmmakers, viewers, and even "true story" subject matter that creators mine for escapist entertainment. The characters in the new “Scream” don’t just all have the same genre movie knowledge of the original’s Randy Meeks, they would destroy him in a trivia contest.

Tara is attacked by someone wearing the Ghostface outfit from the in-universe “Stab” franchise, based on the Woodsboro murders committed by Stu Macher and Billy Loomis, but she survives, bringing her estranged sister Sam (Melissa Barrera) back from Modesto to their hometown. Much like Sidney Prescott (Neve Campbell) from the original, Sam has some dark family drama that forced her to leave her sister behind, but it feels like this new killer attacked Tara to get the big sis to come home. She brings her new beau Richie (Jack Quaid of "The Boys") along for the ride, even though he’s never seen a “Stab” movie. By the way, they’ve made eight “Stab” movies and the last one was particularly loathed by the fan base for reportedly betraying what worked about the franchise in the first place. Of course, Rian Johnson directed.

Before Tara can even get out of the hospital, Ghostface is on a rampage, leading Sam and Richie to the man who they think can help them figure out who’s behind the mask this time: Deputy Dewey (a very effective David Arquette, given more dramatic beats than usual. I hope it leads to more work like it.) He calls Sid and texts Gale (Courteney Cox), and the world-famous trio is back in town before you know it, but directors Matt Bettinelli-Olpin and Tyler Gillett wisely don’t let them take over the narrative. They’re flavoring, a nod to the past instead of the whole meal like in some other re-quels. Think of them like the legacy characters in the Star Wars sequels—essential but not driving the story.

No, the focus here is again on a group of young people who have seen enough “Stab” movies to know that the killer is probably one of their own. It doesn’t help that almost everyone in town has a connection to the original characters—ask the Strodes how well that usually goes in horror movies—such as Wes Hicks (Dylan Minnette), the son of Judy Hicks (Marley Shelton) from “Scream 4,” or Mindy Meeks-Martin (Jasmin Savoy Brown) and Chad Meeks-Martin (Mason Gooding), related to poor Randy. And then there’s Amber (Mikey Madison), the one who seems most protective of Tara and distrusting of Sam. As for Samantha, she has such a close relationship to one of the original characters that she hallucinates conversations with him (that have some dodgy CGI that make them less effective than they probably were on paper). One of these young people is probably a killer. Given the track record of this series, probably more than one.

What really matters to the success of this “Scream” is the manner in which Bettinelli-Olpin and Gillett build to their truly effective set pieces. One in a darkly lit hospital has the violent energy of John Carpenter and the extended party sequence/climax—it always ends at a party—is wonderfully constructed, shot with fluid camerawork by Brett Jutkiewicz and tightly edited by Michael Aller. Brian Tyler’s score elevates the brutal violence in death sequences that don’t feel as casual or tongue-in-cheek as a lot of nostalgic horror tends to feel. So many movies like “Scream” wink at their audience and forget to be remotely scary. The new “Scream” tries to be an actual horror movie instead of just a meta reference to the genre.

While this may not be a fair game to play, it’s impossible not to consider how the film would have differed if Craven had lived to make it himself. I do think that he would have drawn a few better performances from the young cast, who are all good enough but nowhere near as distinctly memorable as the original crew, sometimes leaning into melodramatic emotions in a way that Craven would have dialed down. On the other hand, the original trio are excellent, conveying the trauma of having to go through this nonsense again in a way that feels genuine. And what really matters is how much Bettinelli-Olpin and Gillett have learned from the Craven originals in terms of craft. Whereas Craven used visual references to masters like Hitchcock and Carpenter, the new filmmakers have Wes himself to use as a role model, and they undeniably get to the core of a lot of what he did best in both craft and genre deconstruction. After all, there’s a reason the film’s dedication reads “For Wes” and a scene near the end even uses the phrase “passing the torch.” I’m not sure about the latter but I’m confident that Wes would be impressed enough to consider it. 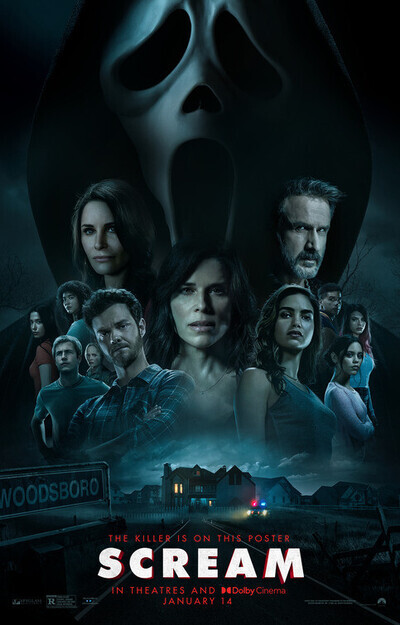 Rated R for strong bloody violence, language throughout and some sexual references.