You probably shouldn’t watch the new Irish haunted house pic “The Cellar” for either its plot’s originality or technical expression. This movie is about a new home-owner whose daughter goes missing in a spooky cellar that may or may not be haunted by Satanic math. Writer/director Brendan Muldowney’s vision of a cryptic dread might bring to mind the work of both the weird fiction figurehead H.P. Lovecraft and/or his cheaper Italian admirers from the 1970s and 1980s, particularly Lucio Fulci and his gross, surreal “Gates of Hell” trilogy.

Too bad, because “The Cellar” doesn’t have the manic energy that could have compensated for its lack of creepy and/or memorable Lovecraftian horrors. “The Cellar” doesn't even need to be a smarter or even more faithful homage. All it needs to be is a little more of something—energetic, gross, thoughtful ... something!—to make it compelling enough to withstand comparisons to its many generic precedents.

Problems with “The Cellar” start immediately and continue throughout. We follow concerned and increasingly obsessed parent Keira Woods (Elisha Cuthbert) as she tries to figure out how exactly her reluctant teenage daughter Ellen (Abby Fitz) disappeared into their new house’s basement. To be fair, Keira’s just moved into her expansive new country home—filmed in Roscommon, Ireland!—and her skeptical husband Brian (Eoin Macken) doesn’t seem as concerned about the weird “glyphs” that she finds all over the house. Like a math equation that Keira finds on a cornerstone, whose Hebrew characters can be read as “Leviathan” if you treat the equation like a word scramble.

So Keira has got to push the plot along independently while her video-game-playing son Steven (Dylan Fitzmaurice-Brady) occupies the same space as some mildly supernatural goings-on. Mainly: the beads on a nearby abacus creep from one side of the thing to the other—without anyone visibly guiding their movement.

I want to joke about this sleepy and often seemingly half-finished scenario, but I also must admit that, in time, I wanted to love “The Cellar” because of its goofy plot and often grindingly slow pace. I can’t recommend this movie because it’s got way too many basic storytelling and image-making problems that even generous viewers will have to accept up front. But … once you get used to its weirdly gradual pacing and al dente character/personality development, you might find yourself rooting for “The Cellar” too.

Cuthbert in particular takes some Herculean pains to sell Muldowney’s dialogue. Like when Keira learns—from Ellen’s school principal—that her daughter was being cyber-bullied. We never really understand or appreciate what Ellen was being picked on for or what these revelations mean to Keira, who tells Brian, but never conveys how Ellen’s “still a little girl to me.”

Still, the most immediate problem with “The Cellar” is that everybody but Cuthbert seems to have made this movie on autopilot. There’s no great conceptual continuity to unite its ideas beyond a shapeless, arcane, and possibly unknowable threat. Unfortunately, that sturdy concept is given shabby expression here, as in conceptually sound but practically dopy scenes featuring a seemingly endless set of basement stairs. Or a seconds-long focus on a barely detailed wall mural of screaming human faces. These images aren’t strong enough, as expressed, to be pored over beyond a very brief amount of time. But the camera lingers on both the stairs and the wall, without much inflection or perspective, and for so long that a few moments seem to last an eternity.

I usually root for movies like “The Cellar,” especially ones where a missing girl is likened—by her mother—to Schrodinger’s hypothetical cat since she’s “neither dead nor alive until we find her.” I also like the idea of a gramophone that hypnotizes its listeners with the mesmerizing sounds of counting numbers. I even sit up in my chair whenever movie characters describe the Biblical sea serpent Leviathan as “some sort of sea creature from Hebrew mythology.” Still, I could not find much in “The Cellar” beyond the suggestion of a few higher concept ideas. Much like Schrodinger’s cat, your enjoyment of “The Cellar” depends on a lot of complex factors that are best hinted at, repeatedly, and then eventually abandoned. Don’t ask me to explain myself further; you’ll know what you’re looking at when you see it.

Now playing in theaters and available on Shudder. 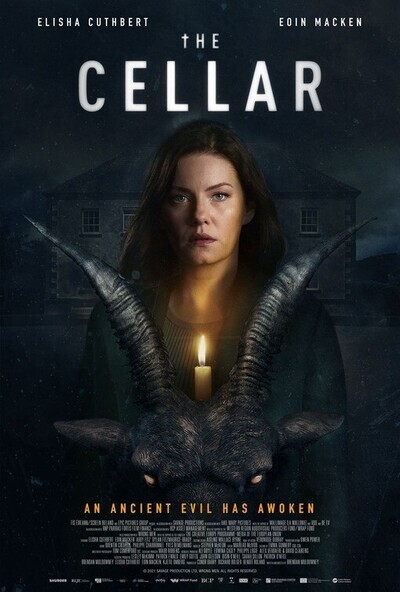