“The Lost City” isn’t an especially unique film; its premise draws on “Romancing the Stone” and countless other adventure movies. Its punchlines are recognizable from a distance as the volcano dominating the remote island where most of the story takes place. This is a movie you can get a clear sense of from its opening moments, every beat clearly telegraphed.

There is, however, a significant amount of comfort and delight in all this familiarity. Directors and co-writers Adam and Aaron Nee understand exactly what their audience wants—much like a good romance novelist might—and deliver an undeniably charming (and refreshingly IP-free) romantic romp. This is a movie you watch in the theater, with popcorn, then again and again on streaming, with a glass of wine.

Loretta Sage (Sandra Bullock) is a burnt-out romance writer whose grief after the loss of her husband threatens to derail her career. Her disdain for her books is only matched by her dislike of their cover model, Alan (Channing Tatum), a seemingly dim beefcake who indulges her readers at signing events.

After an event promoting her latest book, Loretta is abducted by explorer/rich guy Abigail (it’s a gender-neutral name, apparently) Fairfax, played by Daniel Radcliffe. Fairfax knows that the lost city from Loretta’s book is real, and he wants her to translate some ancient writing that leads to a treasure before a volcano erupts and covers the whole thing. Alan mounts an ill-advised expedition to save Loretta, with help from his meditation guru, Jack (Brad Pitt), and Loretta’s beleaguered editor Beth (Da’Vine Joy Randolph).

Loretta and Alan’s eventual romance is unavoidable, but “The Lost City” does a great job exploring the mounting chemistry between Bullock and Tatum’s characters. In particular, the movie highlights Alan’s emotional intelligence and unwavering support. He may be the kind of guy who refers to Loretta as a “human mummy,” but he also knows she gets cranky without snacks, and that she could use a slightly more sensible pair of shoes traversing all that rocky terrain. Like many a beloved romantic hero, Alan is not only a gorgeous man, he’s a man who cares.

Tatum is great casting for a role like this on several levels; not only does he look like he belongs on the cover of a romance paperback, he’s also an actor who understands his own appeal and has proven time and again that he isn’t afraid to play it for laughs. Bullock is also more than happy to play into her character’s physical awkwardness and eventual shedding of her prickly exterior—it’s not exactly unfamiliar territory for her, either. Together, the pair exude fun and a sense of affection that’s easy to get caught up in.

Other members of the supporting cast, particularly a very welcome Patti Harrison as Loretta’s hysterically self-involved social media manager, add bright, bizarre punches of humor to a script that otherwise plays it by the numbers (oddly, this isn’t a criticism, “The Lost City” is working with an effective formula). Radcliffe is the only element of the movie that doesn’t work quite as well as the rest. His character is the one area where the film tries to change up established archetypes, and the result is that he feels out of place in a story where everyone else comfortably fits into their roles.

“The Lost City” may get dinged by some for being formulaic and silly, but it does many things well that are notable. It’s bright, both visually and atmospherically. It’s an original story, told by filmmakers who get what kind of movie this is. Most importantly, its central relationship displays a real understanding of the emotional sensitivity and vulnerability that make romance attractive as a genre. Ultimately, “The Lost City” is interested in hitting viewers’ expectations head on. It does so on a level that may seem obvious, but is done with an amount of care that’s sure to hold up to repeat viewings.

This review was filed from the SXSW Film Festival. The film opens on March 25th. 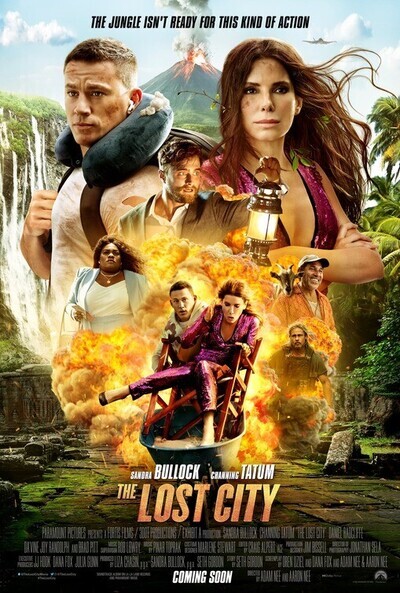