A woman's body floats face down in dark waters as somber cello music swells. One quick title and dissolve later and the water, sans body, is now bright and inviting. The camera pans over a picturesque coastal Croatian town. Everything is sunshine and palm trees as bright-eyed new mom Beth (Leighton Meester) makes her way by taxi to a girls weekend away with best friend Kate (Christina Wolfe).

In free fall after the dissolution of her marriage, the whole trip is on Kate's, including the lushest AirBnB, raw oysters, and copious amounts of alcohol. They’ve been best friends since Beth’s semester abroad in England, during which Kate introduced Beth to her now husband Rob (Luke Norris). The women have drifted a bit since the birth of Beth’s daughter Aster. By the end of Beth and Kate’s weekend, one of them will be dead.

Written by Sarah Alderson from her own novel and directed by Kim Farrant, the new Netflix thriller “The Weekend Away” is cut from the same cloth as those great cheesy '90s thrillers like “Double Jeopardy” where the plot has more twists than the serpentine roads Beth’s taxi takes to get to her AirBnB. But that’s okay. The pleasure of a thriller like this is to get lost in its locales and caught up in the web it spins.

Farrant and cinematographer Noah Greenberg capture the alluring sunny beauty of Split, Croatia with fluid camera movements. Pink sunsets contrast against ancient stone buildings. The filmmakers frame the actors like classic postcards or vacation photos, the cityscape always in the distance behind them. Even during the film’s darker twists, the tourist vibes remain as if the whole movie were told through a slide show recapping the most disastrous getaway ever.

Opposites in both temperament and style, introverted Beth has frazzled hair and no makeup, opting for sage green crochet dress for their big night out; extroverted Kate, on the other hand, dons bright red lips and teal sequins. Meester is excellent at mixing in new mom exhaustion with the excitement she clearly feels being reunited with Kate. Meanwhile Wolfe buzzes through her brief appearance, high on god knows what and ready to paint the town red.

Their “one night of excitement” to get Beth out of her rut starts at a smoky neon lit bar where they meet a couple of handsome men, and ends with Kate missing. Unfortunately, the opening shot deflates much of the tension here as we know Kate’s fate long before Beth does. What makes this part of the film work however is the chemistry between Beth and Zain (a soulful Ziad Bakri), a cab driver and Syrian refugee who helps her retrace the night. Does this all make logical sense? No, not really. But Bakri imbues his character with such a rich interiority and personal code of ethics that you almost buy what the movie is selling.

Films like this live and die on the commitment of their lead performance and whether the audience roots for her to get out of this mess. Meester has always had an incredibly likable screen presence and the movie wisely sticks to her point of view throughout, anchoring the audience's investment in her. In the more emotional sequences, Farrant does not shy away from a classic close-up, allowing Meester to showcase her expressive eyes.

Beyond the enjoyable shock factor of the twists—I yelled out “What?!” more than once—the film explores the idea of trust. Beth trusts Kate, even when she gets her to do things outside her comfort zone. That’s the basis of their friendship. Beth trusts Zain. “The heart is your guide,” he tells her in Arabic when the police try to make her doubt this trust. Beth trusts her own instincts, even when the police, Kate’s estranged husband Jay (Parth Thakerar), and even her own husband Rob try to get her to doubt what she knows to be true about her best friend. Although some of the weight of what the film wants to say about gaslighting is undone by the ridiculous plotting, Meester and Bakri’s grounded performances keep the story rooted.

“The Weekend Away” is the best kind of purposely preposterous potboiler. The scenery is gorgeous, the twists keep the adrenaline pumping, and the performances are memorable. Even though you might not remember everything that happens, you’ll have a good time while it lasts. 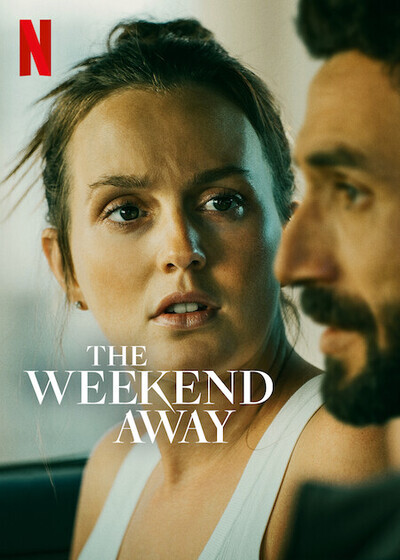