Imagine what the lovely Oscar-winning drama “Minari” might have been like if the grandmother who arrived in America from South Korea was actually an angry and vengeful spirit determined to harm anyone who crosses her, even her own flesh and blood. That sounds more than a little odd but it's essentially what you get with “Umma,” an occasionally interesting but ultimately unsuccessful debut feature from writer/director Iris K. Shim. The film bizarrely takes what could have been a touching and powerful drama about the traumatic family ties that bind (and occasionally choke) and attempts to refit it as a straightforward, if mostly low-key horror exercise chock-full of scenes involving various things popping up out of the darkness with numbing regularity.

Set in a stretch of American farmland that literally appears to be in the middle of nowhere, the film stars Sandra Oh as Amanda, a first-generation Korean-American woman who lives with her homeschooled teenaged daughter Chrissy (Fivel Stewart) and supports the two of them by keeping bees and selling organic honey to online trendsetters with the help of friendly local shopkeeper (Dermot Mulroney). If that didn’t make them isolated enough from the outside world, there's also the fact that, as a result of an apparent allergy that Amanda has towards all thing electrical, the two are living entirely off the grid to the point where their few visitors are required to leave their phones in their cars before entering so as not to set her condition off. Yes, Amanda and Chrissy seem to have a strong and loving relationship but their entire setup is so odd that it almost feels as if they are hiding from someone and do not want to be found, and not just because of the grim flashback to Amanda’s own childhood that serves as the opening scene.

That guess proves to be accurate with the arrival Amanda’s uncle (Tom Yi), who arrives from Korea to inform her that her mother has passed away. He scolds her for abandoning her Umma (Korean for “mother”) and for not teaching Chrissy Korean before presenting her with a suitcase containing a few personal effects and her cremated remains; Amanda is then told to properly inter according to tradition so that Mom’s spirit can move on. Needless to say, Amanda instead stows the suitcase in the basement and refuses to tell Chrissy anything about what is bothering her, not even when the nightmares and flashbacks that she thought she had at bay begin to return with a vengeance. This serves to exacerbate a wedge between the previously close mother and daughter that began with Amanda’s discovery that Chrissy has been surreptitiously looking into colleges she might attend and the increasingly angry spirit of Umma takes advantage to wreak havoc upon the daughter that she feels abandoned her to die alone.

In many ways, “Umma” is an interesting and ambitious drama that is willing to take on any number of weighty topics, ranging from the dark side of assimilation to parent-child relationships to the myriad ways in which trauma can be passed, sometimes unintentionally, from one generation to the next. These ideas are presented in a number of intelligently conceived scenes that are driven by strong performances from the always-reliable Oh, Stewart, and Odeya Rush. Rush gets a few sharp scenes as Mulroney’s niece from the city who befriends the lonely Chrissy, and opens her eyes to the possibility that Amanda may not be entirely forthcoming about her “allergy.” During these moments, “Umma” is an uncommonly strong work and it kept me interested.

No, the problem with “Umma” has to do with its supernatural elements. This is not to say that the story elements here could not possibly serve as the basis for a horror film; they most certainly could. The trouble is that the spooky stuff, most of which arrives in the form of things popping up in the shadows or Umma otherwise making her presence known, are just not handled especially well. Sure, there are a couple of decent “Boo!” moments but they become progressively less effective as they go on, as if everyone involved with shooting them just wanted to get them over with in order to get back to the meatier dramatic scenes. Another problem is the abbreviated 83-minute running time, which leads to a certain choppiness in parts and the suspicion that this was once a much longer film. Perhaps it was cut to pieces and tossed to theaters with barely any advertising in the hopes that the name of co-producer Sam Raimi might lure in genre fans too young to get into “X.”

As I said, “Umma” is not quite good enough to recommend in the end and my guess that those lured in by Raimi’s name alone are likely to hate it. (Look for the CinemaScore rating to rival that of the last movie that came out named “mother.”) That said, it's not entirely without merit and contains just enough compelling elements to keep you watching in hopes it will somehow all come together. If nothing else, it leaves me curious to see where Shim goes from here and what she might be able to accomplish with a more tonally consistent screenplay. 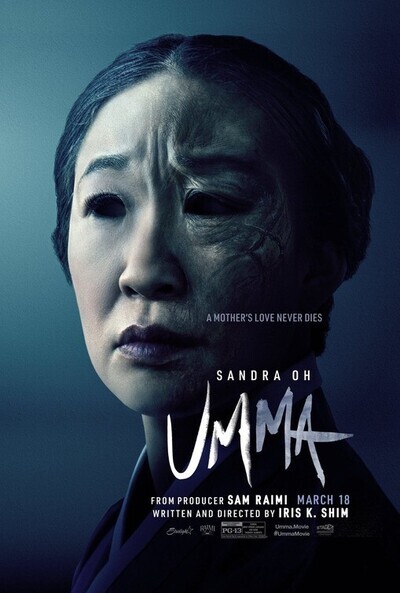